The Bold and the Beautiful’ Spoilers: Sheila Engineers Brooke’s Reveal – Deacon Plays Along? 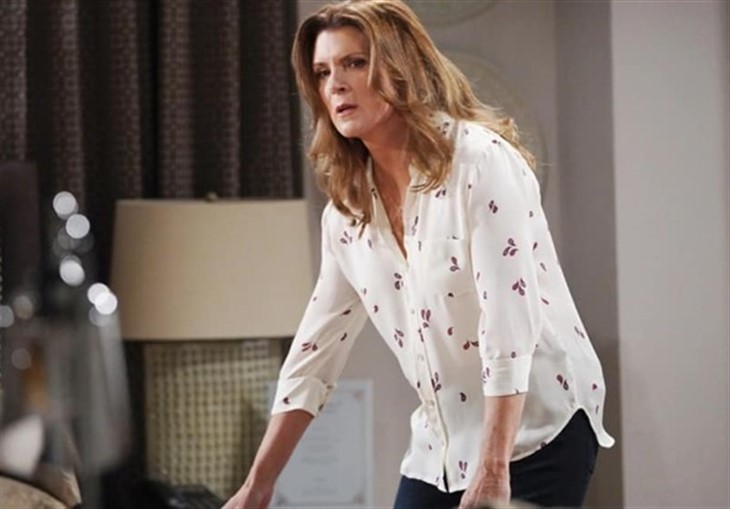 The Bold and the Beautiful spoilers document that Sheila Carter (Kimberlin Brown) has deep resentment in her heart for Brooke Logan Forrester (Katherine Kelly Lang). Sheila is justifying her current attitude because Brooke threatened to block her from being in contact with John Finn Finnegan (Tanner Novlan) and his family.

But Sheila once shot Brooke and Taylor Hayes (Krista Allen). Today, she sees Brooke as the villain and Taylor as her ally.

Meanwhile, Deacon Sharpe (Sean Kanan) has, what he believes, that he has reformed as well. Hope’s father also senses that he is close to realizing his ultimate goal of reuniting his family.

The Bold And The Beautiful Spoilers: Paris Is Startled When Carter Puts The Brakes On Their Smoldering Passion

Sheila wants Taylor to believe that she is sincere about turning her life around. B&B’s arguable GOAT (greatest of all-time) villain has, of course, not changed at all.

Orchestrating a very soapy alcohol bottle steal, switch, and return at Il Giordino was classic Sheila. The idea that she could do so with everything working to perfection furthered the suspension of disbelief scenario, where the audience accepts the otherwise unlikely to further the plot.

Taylor is not sure if Sheila is being real or not. Standing on the fence allows Allen’s character to openly observe Sheila with the goal of preventing her from hurting her family.

Brooke is not considered family. Taylor no longer sees her as a rival, as Sheila asserted.

Taylor has opted to let go of past grudges. She does not want to waste energy on Brooke or be provoked by her condescending attitude.

The Bold And The Beautiful Spoilers – Deacon Sharpe Has A Choice

The Bold and the Beautiful Spoilers: Brooke Has A Warning For Deacon – But Will He Comply? #bb #BoldandBeautiful https://t.co/Yz8dMZtqz2

Deacon’s subsequent explanation of events gives him an element of power. Brooke can not deny her revived link to him, with whatever it means. While not part of Sheila’s misguided alcohol scheme, he stands to benefit from its results. So, why block what may be inevitable?

Teasers and Sheila’s history wink hard at Brooke’s alcohol supplier doing whatever it takes to ensure her downfall. Consequences will be fierce, with the potential for realized alliances and revived couple pairings.