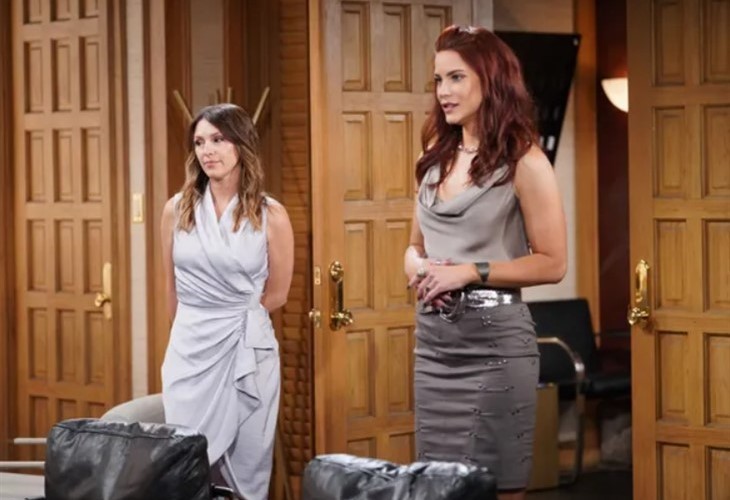 The Young and the Restless(Y&R) spoilers and updates tease Chloe Mitchell (Elizabeth Hendrickson) has been trying to keep the peace. Chloe had hoped to be able to work with her friend Chelsea Lawson (Melissa Claire Egan) at Newman Media. Chloe has been willing to work with Adam Newman (Mark Grossman) because she wanted to spend time with Chelsea. Chloe decided to get Sally Spectra (Courtney Hope) to come to work with her and Chelsea in the fashion division of Newman Media. Chloe did not know that she was going to have trouble with Chelsea and Sally.

Chloe has been concerned about Chelsea. Chelsea has wanted to get back her relationship with Adam. Chelsea had hoped that when she was working at Newman Media that she would be able to get Adam to want to be with her again. Adam has wanted to give Chelsea a chance to pursue her career as a designer but has not wanted to pursue a relationship with her. Adam believes that he needs to move on from being with Chelsea.

The Young And The Restless (Y&R) Spoilers: Tricia Cast Is Selling This Amazing Handcrafted Item On Etsy!

Chelsea and Adam have had trouble dealing with their son Connor Newman (Judah Mackey). Connor has wanted to get his parents back together. Chelsea has been sharing her problems with Chloe. Chloe has wanted to support Chelsea but believes that she needs to move on without Adam. Chloe wants Chelsea to focus her attention on the work they are doing at Newman Media and not be thinking about getting back together with Adam.

Chloe has found a new friend in Sally. Chloe wants the best for Sally and believes that she is an asset to the fashion division. Chloe had wanted Sally to be able to get along with Chelsea. Chloe has been frustrated with Sally and Chelsea because they have been acting like rivals. Sally has many ideas that Chelsea has not wanted to use. Chelsea has been upset that Sally has shown romantic interest in Adam. Chelsea has wanted to keep Sally away from Adam.

Chloe has wanted Sally to have a professional relationship with Adam and not a romantic one. Chloe has believed that Sally would be hurt by Adam if she gets into a relationship with him. Chloe has been concerned that Chelsea has been upset that Sally and Adam have been getting closer. Chloe wants Sally to focus her attention on her work for the fashion division because she wants Chelsea and Sally to be able to work together.

The Young and the Restless Chloe wants to have a calm working relationship with Chelsea and Sally. Chloe has been trying to deal with the problems that Sally and Chelsea continue to make because they both want to have Adam in their lives. Can Chloe find a way to get Sally and Chelsea to put aside their feelings for Adam in order to do their jobs?