The Young And The Restless Spoilers: Tessa Proposed To Mariah, Now Mariah Proposes To Tessa 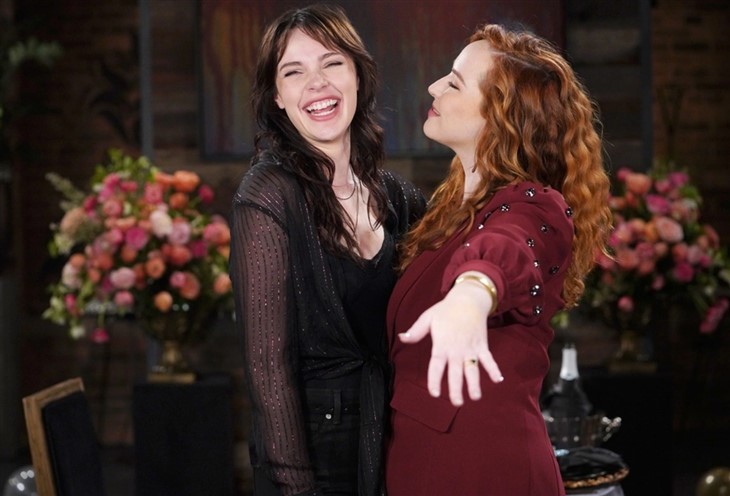 The Young and the Restless spoilers reveal Mariah wanting to be just as romantic as Tessa was when she got down one knee and proposed to her at Society, so Mariah decides she also needs to propose.

The Young And The Restless Spoilers – Romance Abounds In GC

Yes, Mariah Copeland already said yes to Tessa Porter’s proposal and shared the news with Sharon Rosales (Sharon Case), who was thrilled for her daughter and her girlfriend, so what more can she want? Well, she wants to declare her love for Tessa in her own unique way so she invites her over to Crimson Lights and doesn’t tell her what it’s about.

The Young And The Restless (Y&R) Spoilers: Tricia Cast Is Selling This Amazing Handcrafted Item On Etsy!

When Tessa arrives, Mariah takes her out on the terrace and shows her an essential shrine she made to their love, with photos and memories all around. Then, she takes her turn doing the proposing and asks Tessa to marry her. Of course, Tessa accepts, but Mariah was able to make the big declaration of love she wanted, so now it’s time to plan a wedding.

Actress Camryn Grimes, who just got engaged herself in a romantic, Disney-themed way on her January 7 birthday when she turned 32, may have found that to be all too familiar after taping two proposals for her character, but actress Cait Fairbanks explained in the February 1, 2022, issue of Soap Opera Digest why Mariah felt she had to do this.

“It’s a huge affirmation,” Fairbanks said. “Culturally, it’s a huge moment in your life when someone proposes to you, which Mariah got to experience and now she wants to give that moment to Tesssa. Mariah and Tessa are just a normal soap couple going through the trials and tribulations of being in love. However, there will be some challenges coming up for them very soon.”

What could those challenges be and does it have anything at all to do with the fact that Mariah and Tessa want to adopt a baby? After all, Mariah thought that was the only reason Tessa wanted to marry her. While Tessa said that wasn’t true and Mariah believes her, even Sharon had to wonder. Stay tuned to The Young and the Restless weekdays to see how this story plays out.