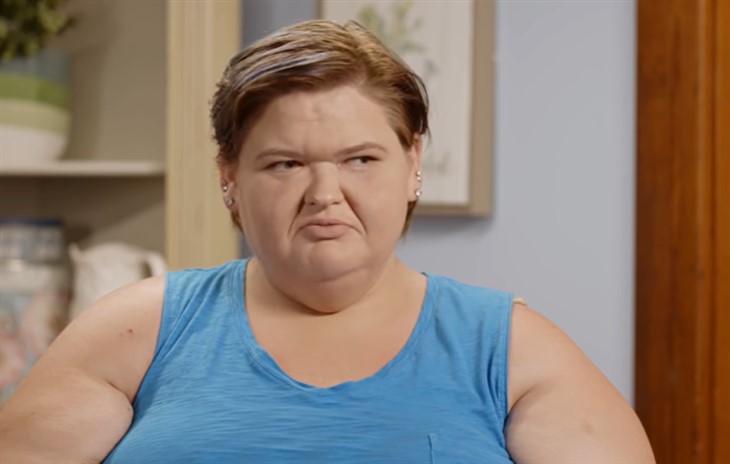 1000-Lb Sisters fans see that in the current season of the TLC show, Amy Halterman took a bit of a back seat. Actually, the focus remains on Tammy who seems to grow larger by the day. However, Amy’s visit to Dr. Procter revealed that she’s avoiding her own weight issues. So, fans fear she’s on the road to regression.

Tammy Slaton definitely regresses and fans fear that she probably heads down a sad road to slow suicide. Obviously, Amy doesn’t want that for her sister. So, she annoys Tammy by urging her to focus on her weight loss and get a life. Unfortunately, Tammy booked herself out of rehab and that seemed like a very bad idea as she put on even more weight.

When 1000-Lb Sisters‘ star Tammy broke off with her boyfriend, she felt depressed and stopped watching her diet or exercising. These days, fans see that she’s truculent, uncooperative, and packing on the pounds. Well, when her sister Amy Halterman had her baby, she also seemed to stop watching her diet. And, like Tammy, she tends to ignore the potential outcome.

Amy Halterman had her baby, Gage sooner than her doctor liked. Actually, when she last him, she was four months pregnant and weighed in at 288 pounds, Admittedly, it was a lot better than her 400+ weigh-in. In a teaser, she stood on the scale and it revealed she weighs 275 pounds. Amy seemed happy with that and told the doctor that she’s a lot better off than at over 400 pounds. Well, he seemed disappointed with her.

The 1000-Lb Sisters stars admitted that she hates the scale. She claimed it makes her depressed if it goes up, which makes her eat more. However, she clearly avoids facing the reality. In fact, she made an excuse about not watching what she eats, blaming takeouts. In the teaser for the show, she said that she couldn’t cook in the new house. So, they ordered in takeouts.

1000-Lb Sisters fans seem afraid for Amy Halterman. Actually, she seems more concerned about Tammy, when she could end up in a bad situation herself. It seems like she no longer takes exercise and dieting seriously.

One fan wrote, “So disappointed in Amy! At this point, the show needs to be taken from them because neither of them are trying!” Then another fan noted, “I don’t understand why Amy feels she doesn’t have to be focused on her weight [but] Tammy’s all the time. 🤷🏽‍♀️”

Irritated and concerned, one fan penned, “You are getting right back. Stop making excuses. Now your (sic) pregnant…more weight gain. Stop 🛑 harping on Tammy you need to worry about your own weight.”

Be sure to catch up on everything happening with the TLC cast right now. Come back here often for more 1000-Lb Sisters spoilers, news, and updates.