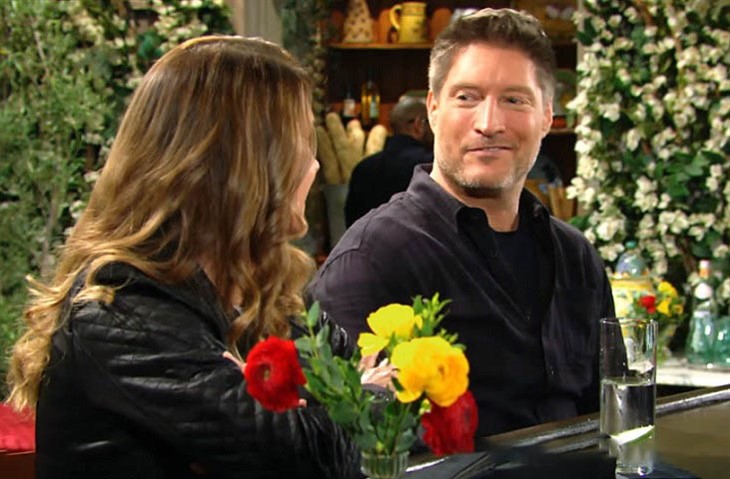 The Bold and the Beautiful spoilers document Deacon Sharpe (Sean Kanan) believes that he has a chance to realize the family life he dreamed of while imprisoned. No one would have given him even a gambler’s chance of getting close to the woman he has never gotten over. But, as the audience knows, he recently shared a kiss with her around the time the clock famously struck twelve.

Sheila Carter (Kimberlin Brown) laughed off Deacon’s goals when she first became aware of them. Her past with Brooke Logan Forrester (Katherine Kelly Lang) is the main reason why Sheila thinks as she does.

Brown’s character is also jealous of Deacon’s progress and has openly told him that she is living vicariously through him. Sheila believes that Deacon is indebted to her and wants his help in forging a relationship with John Finn Finnegan (Tanner Novlan).

The Bold And The Beautiful Spoilers: Sheila Spies On Deacon and Hope As They Talk About New Year’s Eve

His attitude is fully influenced by Brooke’s downward view of Sheila. Brooke is aggressively defensive and offensive toward the woman who shot her and committed numerous other crimes against her loved ones and others in the past.

However, Deacon knew Sheila’s backstory and still formed what could be termed a friendship with her when first being released from jail. Staying in her hotel room and initially going along with her fake couple’s pitch were bad mistakes that created a connection he has since been unable to escape.

There is no logical question about Brooke’s interest in Deacon. She became involved with him while he was married to her and Eric Forrester’s (John McCook) daughter, Bridget Forrester (Ashley Jones), and had Deacon’s baby, Hope Spencer (Annika Noelle).

Drinking with Deacon, after both people drank an excessive amount of alcohol in a short period of time, did not have to result in anything romantic. But Brooke kissed Deacon when her inhibitions were lowered.

Sheila is outraged that Brooke threatened to keep her away from Finn and his family. Taylor Hayes (Krista Allen) is giving Sheila a chance, which allowed her to be at the cliff house on Christmas Eve.

The setup has Sheila unable to stop herself from undermining Brooke from behind the scenes, which benefits Deacon. While he was not responsible for Brooke becoming drunk, through the alcoholic champagne she unknowingly drank, he joined her in vodka shots.

Brooke does not yet know that Sheila intentionally caused her fall. Will she blame Deacon for being in Sheila’s proximity? Alternatively, Brooke may only have him to lean on if Ridge reacts as expected and leaves Brooke when all is revealed?