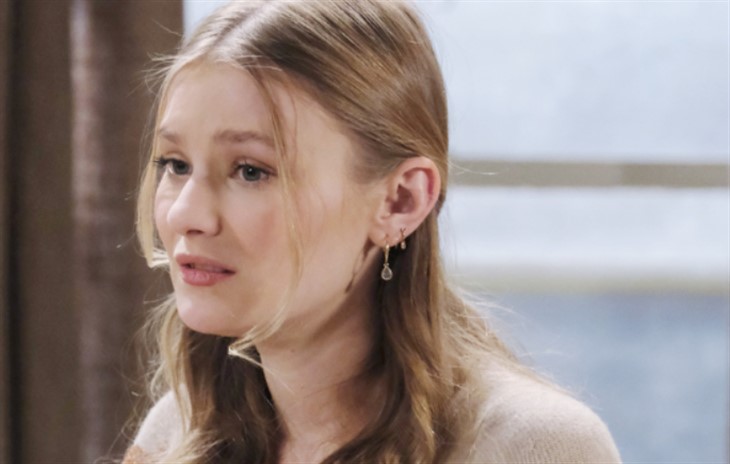 DOOL spoilers reveal that during the week of January 31, Nicole will begin to figure out that Rafe is right. When Rafe first accused Ava of beheading Duke the Bear, Nicole had trouble believing it. Then, Rafe claimed that Ava must be responsible for his Internal Affairs investigation and arrest. However, Nicole wanted to give Ava the benefit of the doubt.

Next week, Nicole begins to suspect that Rafe might be right. Nicole ends up confiding in Allie about what’s going on. Of course, Allie will be stunned by what Nicole tells her.

Allie could decide to get to the truth. Allie and Rafe have a very close relationship. Allie actually was going to give her baby to Rafe to adopt. So, she won’t appreciate anyone framing Rafe or causing him any heartache. Allie is also close with Nicole despite her cheating on Eric Brady (Greg Vaughan). So, Allie could end up confronting Ava and demanding to know the truth.

Days of Our Lives spoilers reveal that Ava was trying to be a better person. So, Allie probably doesn’t think she has anything to fear. Allie also doesn’t realize that Ava has gone back to her evil ways. Allie is mistaken if she thinks that Ava won’t hurt her because she’s dating Tripp. Ava is back to being a villain and isn’t going to let anyone ruin her plans, including Allie.

Plus, Allie has no idea that Ava is helping Kristen DiMera (Stacy Haiduk), wanted to kill Abigail DiMea (Marci Miller), and is sending innocent Salemites to be held hostage on a private island.

Ava could think that Allie knows too much and is someone that could thwart her plans. Ava might decide to get rid of little Miss Horton. However, if Allie goes missing, Tripp won’t stop until he finds her. Tripp will be especially worried since others in his life go missing. Steve “Patch” Johnson (Stephen Nichols) and Kayla Johnson (Mary Beth Evans) stop communicating from Italy, which could set off alarm bells. If Tripp finds out about his mother’s actions, how will he respond? Will it destroy the bond that Ava and Tripp have developed?