General Hospital Spoilers: Spencer Readies Himself For Spring Ridge, While Friends And Family Gather At Kelly’s 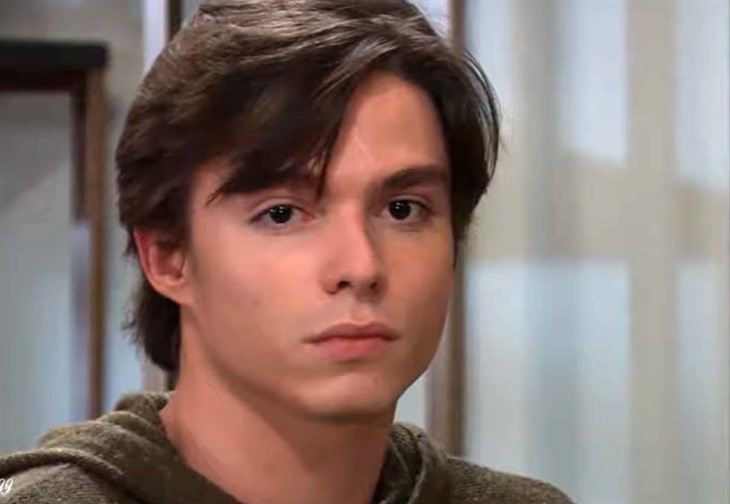 General Hospital spoilers tease that Spencer Cassadine (Nicholas Chavez) will ready himself for Spring Ridge as best he can, while friends and family gather at Kelly’s to support him in an upcoming episode of General Hospital!

General Hospital viewers will recall that Victor Cassadine (Charles Shaughnessy) was able to get Spencer a pretty good deal regarding the charges he was facing in court, although he could not get him a jail-free option. General Hospital viewers will recall that Spencer wasn’t too hot on doing any prison time at all even though Spring Ridge is a minimum security prison and his girlfriend Esme Prince (Avery Kristen Pohl) is interning there.

Victor had assured him this was the best deal he could get, and it’s pretty much assured that Dr. Kevin Collins (Jon Lindstrom) will ensure there will be no contact with Ryan Chamberlain (Jon Lindstrom), so there’s that! Kevin already restricted access to Ryan by Esme and he’ll restrict access for Spencer, as well – Laura Collins (Genie Francis) wouldn’t have it any other way, and neither would Kevin, for that matter!

General Hospital viewers will see Spencer’s family and friends gather to encourage him with a party at Kelly’s; apparently everyone survived Esme’s attempts at chaos at the Corinthos cabin, even Trina Robinson (Sydney Mikayla)! General Hospital viewers will recall that Esme went to the teens’ getaway with a prescription for Tramadol, an opioid pain medication for fifty 600 milligram pills and a burner phone; those pills could do lots of damage!

It was clear Esme was targeting Trina especially, because of her jealousy over Spencer’s friendship with her, but in spite of that Trina will be back to work at the Jerome Art Gallery sooner than expected. Trina, Cameron Webber, (William Lipton) and Josslyn Jacks (Eden McCoy) should be there, and probably Laura, Kevin, and maybe Nikolas and Ava Cassadine (Marcus Coloma, Maura West) – it depends on Spencer, and Esme might be there if she’s not detained otherwise!

General Hospital viewers can imagine if Spencer found out about Esme’s culpability in what happened at the Corinthos cabin, he may by now have dumped her like a hot potato, and Esme won’t like that! But he should be safe from her in Spring Ridge because Kevin can also limit her from having contact with Spencer as well as he can with Ryan, and there will be good cause to do so if Esme could be a danger!

Still, he braces himself as he really doesn’t know what to expect – all he knows about prisons is hearing old family stories about Michael Corinthos (Chad Duell) being raped before Jason Morgan (Steve Burton) could prevent it! Uncle Sonny Corinthos (Maurice Benard) is off the rails and in no shape to offer any protection to Spencer behind bars, but even though Spencer visited his Aunt Alexis Davis (Nancy Lee Grahn) there, all he knows about is the visitation room! General Hospital viewers can imagine that all Spencer can think about is the worst case scenario!