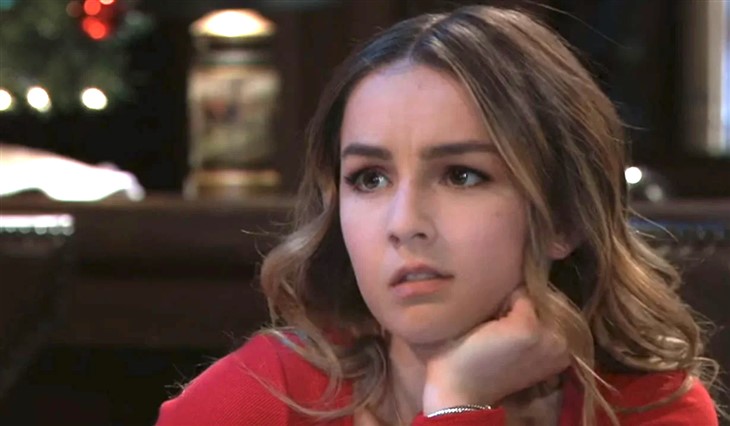 General Hospital spoilers tease that Kristina Corinthos-Davis (Lexi Ainsworth) will give her father some much needed encouragement when he comes to Charlie’s Pub seeking Phyllis Caulfield (Joyce Guy) in an upcoming episode of General Hospital!

General Hospital viewers know that if Sonny is still off his meds and no one except Nina Reeves (Cynthia Watros) knows, by the time he goes to Charlie’s Pub seeking Phyllis, he may have already gone into a depressive mode! With bipolar disorder, moods can shift quickly and erratically or they can go into longer patterns, sometimes months or years of either depression or mania and there are four types; bipolar 1, bipolar 2, Cyclothymic disorder, and non-specific bipolar disorder.

In bipolar 2, depression is prominent and a sufferer never goes into a full manic episode. General Hospital viewers would agree that Sonny most fits into bipolar 1, because his manic episodes last a long time, but so have some of his depressive episodes, and when you add grief and rejection to that, Sonny’s in rough shape! The death of Jason Morgan (Steve Burton) and Liam Mike Corbin (uncast infant) plus Carly Corinthos’ (Laura Wright) pushing him away have put poor Sonny nearly over the edge!

General Hospital viewers will recall that it was Phyllis who realized “Mike” was suffering from bipolar disorder when he first started working for her and Lenny Caulfield (Rif Hutton) in Nixon Falls. Phyllis took him to the clinic where she was working and got him diagnosed and on medicine which helped him although it may have not been the same medicine he was on in Port Charles.

General Hospital viewers will remember Carly was distressed that he was on the wrong medicine for his bipolar disorder and immediately got him on lithium, but no one can deny that Sonny was helped by the one he was put on as “Mike”. Carly’s control issues run very deep as viewers may have noticed, even to controlling which prescriptions Sonny should be on when she is clearly not a doctor, and sometimes a change in bipolar medications can be a good thing! Sonny goes to Charlie’s Pub looking for Phyllis; she’s not there at the time but his daughter Kristina is!

General Hospital viewers know that Sonny is sad and dejected after talking to Carly and making no headway towards reconciliation; Carly is unable to move past her feelings of betrayal finding out that Sonny fell in love with Nina as amnesiac Mike! Yet she mourns Jason much more than she mourned Sonny, or so it would seem – perhaps she’s the one who needs to see a psychiatrist even more than Sonny, but Carly’s not going back to Ferncliff, Shadybrook or any of those places!

General Hospital viewers will see Kristina get through to her dad and get him to open up and talk to her about what’s going on, much of which she’s been unaware of. Sonny needs his family more than anything or anyone right now to keep him straight, and if he’s in a depressive stage even more so – Kristina may recognize Sonny’s off his meds and intervene in ways only family can to get him what he needs!