The Bold And The Beautiful’ Spoilers: Ridge Close To The Truth – Steffy And Thomas Become Witnesses 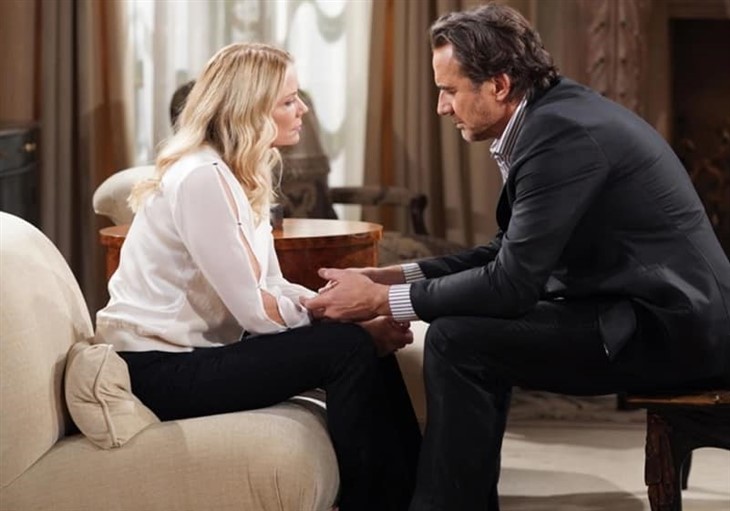 The Bold and the Beautiful spoilers document Ridge Forrester’s (Thorsten Kaye) knowledge about the recent past continues to expand. He will soon know that his wife betrayed him if that process continues.

Brooke Logan Forrester (Katherine Kelly Lang) was concerned about Douglas Forrester (Henry Samiri) telling anyone in Ridge’s inner circle about the Santa Claus sighting. She expressed her feelings while Douglas was at the cliff house, where he immediately raised the issue as soon as he entered the planned Forrester family dinner.

The Bold And The Beautiful Spoilers – Believable To Leave Brooke Logan Forrester Alone?

As concerned as Ridge has been about being with Brooke, was it believable that he would choose to leave her to accept the invitation Steffy Forrester Finnegan (Jacqueline MacInnes Wood) made? That is a debatable plot point.

Fans are often asked to accept unrealistic or implausible actions in the soap world to push the plot.

Ridge left the Logan mansion so he could be at the Finnegan’s when Thomas Forrester (Matthew Atkinson) arrived. Douglas was not supposed to accompany his dad. But Thomas arranged that special event because of a family dinner that was planned.

Meanwhile, Brooke went to the cabin after her husband left because she needed to confide in Hope Spencer (Annika Noelle). Liam Spencer (Scott Clifton) was there, which gave Brooke another trusted ear. So yes, based on what developed, it was believable that Ridge left Brooke alone.

Liam was the first to hear Douglas’ story about New Year’s Eve in the recent past. He brushed off the first few tells.

However, Hope’s inclusion during one of Douglas’ later reviews of the unauthorized trip to the main house quickened Brooke’s reveal date. Just as Liam and Hope were presented with the truth, which led to Noelle’s character confronting her mother, so too is the Forrester trio being slowly enlightened.

Brooke is panicked because she knows that Douglas’ guilt about that night is causing him to confess to his family members. It is natural to think that Douglas will inevitably tell his dad, Ridge, Steffy, or all three what he witnessed.

The Bold And The Beautiful Spoilers – Coming Clean Before Forced Reveal

Brooke retains the option to sit Ridge down and tell him what happened. He knows that she was inebriated on the night in question but is unaware that Deacon Sharpe (Sean Kanan) was present.

The Bold and the Beautiful POLL: Does Deacon Need To Stay Or Go? #bb #BoldandBeautifulhttps://t.co/3VJsZunP9U

There is no doubt that Brooke will be risking Ridge’s rage. He could flip out, leave her, and file for divorce.

Yet, telling Ridge the truth would allow Brooke to state the strongest forgiveness case. She could explain herself rather than respond after the fact when Ridge demands answers that he deserves to know.