General Hospital Spoilers: Sonny Reveals Plan To Get Carly Back, Ned Begs Him To Reconsider 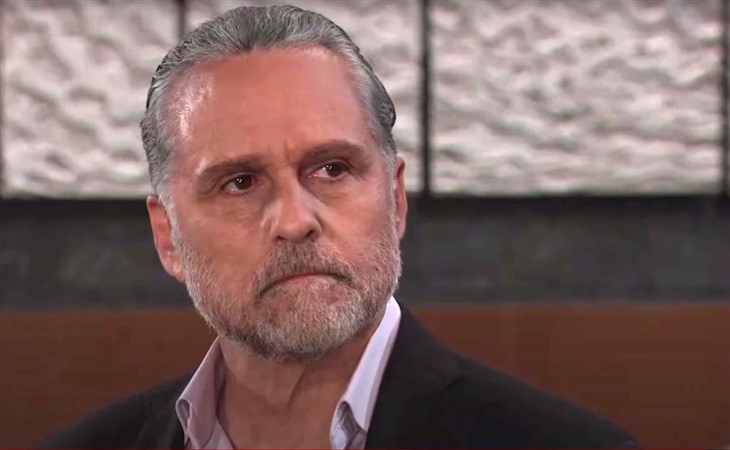 General Hospital spoilers tease in this week’s General Hospital sneak peek, Sonny Corinthos (Maurice Benard) talks to Ned Quartermaine (Wally Kurth) about how he plans to get Carly Corinthos (Laura Wright) back. But as he describes his plan, Ned doesn’t think it’s such a good idea!

General Hospital viewers will recall that Sonny’s been in a tailspin since Carly wanted some time and space from him after it was revealed he fell for Nina Reeves (Cynthia Watros) in Nixon Falls! In a break area of General Hospital, Sonny holds a water bottle as he tells Ned his plans to win Carly back, smiling as he thinks about what he’s going to do. Sonny tells Ned that he’s going to do something so romantic that it’ll knock Carly’s socks off, and Ned thinks for a minute as Sonny heads for the trash can to dump his empty water bottle.

Sonny continues telling Ned his ideas as he says Carly knows that he loves her, but he thinks she needs him to prove it on a grand scale, and Ned asks him if he’s sure it’s the right move. Sonny wonders what he means, as he thinks he should understand, considering he did the same thing with Olivia Quartermaine (Lisa LoCicero)!

General Hospital viewers will remember that because of the misunderstandings Ned and Olivia had a couple of years ago when she went to Europe with Robert Scorpio (Tristan Rogers) to help him find Holly Sutton (Emma Samms) they were estranged for a while! General Hospital viewers will recall it has only been very recently that Ned and Olivia worked things out and are now holding a vow renewal ceremony to celebrate their love and their marriage.

Ned takes a deep breath in response to Sonny’s question and tells him yes, he had messed things up pretty bad, and he had lost Olivia’s trust and had to scramble to win her back. Sonny asks Ned what he did, and he admits his first instincts were to do the same thing Sonny was thinking, to give her this grand gesture to impress her with. Sonny then tells Ned he must be on the right track.

General Hospital Spoilers – No, Sonny Corinthos Is Not On The Right Track

General Hospital viewers will then see Ned explain further as to why Sonny’s not on the right track with planning a grand gesture to impress Carly with, and Ned tells him. Ned explains it was Brook Lynn Quartermaine (Amanda Setton) and Dante Falconeri (Dominic Zamprogna) who convinced him it would not have been the right move, as a matter of fact it would have been a disaster!

He warns Sonny that whatever he’s planning, take it from him – and tells him to reconsider; Sonny looks at him with a blank scare! General Hospital viewers will recall Ned and Olivia were estranged for nearly two years, and Sonny will not have enough patience to wait for Carly that long – and she’s asking him for time and space from him. That is the one thing that impatient Sonny may not be able to give her!