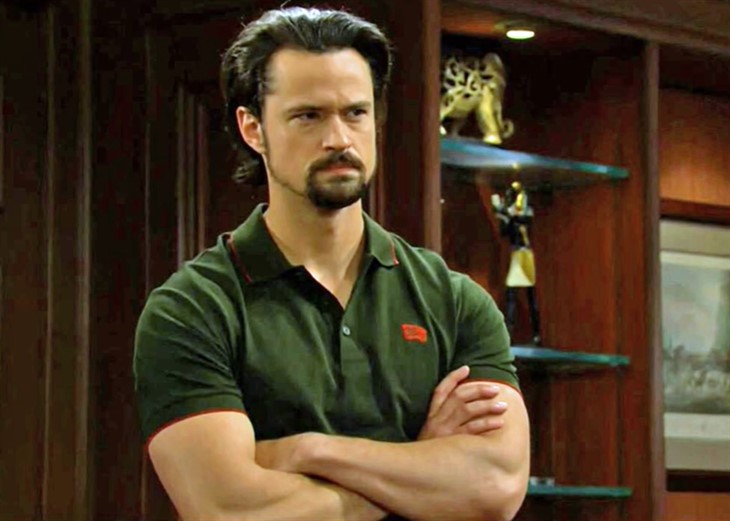 The Bold and the Beautiful spoilers document that Thomas Forrester’s (Matthew Atkinson) probing conversation with his son will prove to be a monumental event. Brooke Logan Forrester (Katherine Kelly Lang) likely felt a chill while Douglas was telling his father that he saw Brooke kissing Deacon Sharpe (Sean Kanan).

Douglas Forrester (Henry Samiri) revealed that his mind was locked rather than limited. His tell added to the voluminous replays, which provide various character’s Thomas Plays Psychiatrist perspectives, about the New Year’s Eve event. The reveal sends Thomas and his sister on a confirmation mission.

The Bold And The Beautiful Spoilers – Explosive Intel Must Be Confirmed

Steffy Forrester Finnegan (Jacqueline MacInnes Wood) is stunned when she learns what Douglas admitted. Like Thomas, she knows that this information will dramatically impact their father.

The Bold And The Beautiful’ Spoilers: Ridge Close To The Truth – Steffy And Thomas Become Witnesses

Ridge Forrester (Thorsten Kaye) remains deeply in love with Brooke and is staunchly defending her. Steffy has sensed for weeks that something is off in Brooke-land but has not been able to confirm what the source of the supposed drama is.

Teasers indicate that Thomas and Steffy will not run to Ridge and tell him what Douglas said. So, they will need to keep him quiet while they seek confirmation.

Ridge feared that Deacon’s return to Los Angeles, California, would prove upsetting. Kaye’s character has also been pushing for Brooke to cut Deacon off so that he would not create disruption.

Brooke is beside herself, but at least she can confide in Hope Spencer (Annika Noelle) and Liam Spencer (Scott Clifton). Lang’s character gained momentary peace during her conversation with Douglas at the cabin.

Douglas seemed to be convinced that his visions of Santa were part of the past and that it was time to look forward. Ridge’s coming awareness of the kiss with Deacon will unearth the very recent past and likely lead to Brooke’s worst fear.

The Bold And The Beautiful Spoilers – Searching For The Truth

An admission, by Brooke or Deacon, would be the easiest form of proof. But Thomas and Steffy can not go to either person and expect an honest answer. Plus, they do not want to make Douglas the focus.

The next part of this engaging storyline will involve Steffy’s search for the truth. Charlie Webber (Dick Christie) will be involved because he is Forrester Creations’ Loss Control specialist and main sleuth.

Fans know that Brooke will eventually be exposed. The thrill is watching the chase and attempting to determine how this secret will be revealed and the fallout on B&B.