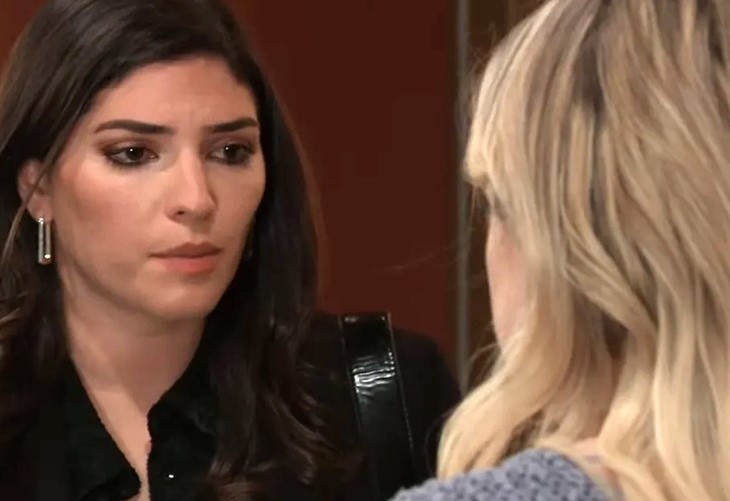 General Hospital Spoilers And Updates – Bailey Quartermaine Has Been Kidnapped

General Hospital viewers know that in spite of all the precautions Maxie, Brook Lynn and Chase to keep Louise Jones hidden in plain sight as Bailey Quartermaine, she’s been kidnapped anyway! General Hospital viewers will remember that the secret came out when Victor Cassadine (Charles Shaughnessy) saw Maxie’s sonogram fall out of her purse and picked it up.

He recognized from seeing a copy Valentin Cassadine (James Patrick Stuart) had in his wallet, as the same baby. General Hospital viewers will recall Victor, after having Valentin chloroformed and then sabotaging Peter August’s (Wes Ramsey) prison transport, aided Peter in kidnapping “Bailey”! Now, Maxie, Brook Lynn, and Chase must make a difficult decision in order to aid the authorities in finding the missing baby!

General Hospital viewers know that this is no time for the authorities to go down rabbit trails! Maxie, Brook Lynn and Chase know that since Peter obviously found out the truth there is no longer a need for lies! Chase, as a cop himself, knows that misinformation, any misinformation, only muddies the waters of a case and makes it more difficult to solve as well as to prosecute!

It is a difficult and humbling decision to have to make, since Maxie and Brook Lynn lied about Bailey being Louise to their mothers, and Chase lied to his brother Hamilton Finn (Michael Easton). Anna Devane (Finola Hughes) will need to be told as well, but once they explain the ruse was to protect the baby from Peter, they will all understand!

General Hospital viewers can imagine that Ned Quartermaine (Wally Kurth) does not take the truth well, considering he gave Chase down the road and blamed him for his “granddaughter’s” kidnapping! He’ll feel that if they hadn’t moved out of the Quartermaine mansion that the kidnapping would not have happened, but calms down when he realizes Leo Falconeri (Easton Rocket Sweda) is safe and may otherwise not have been.

Ned is not wild about the ruse and the lies and of course is disappointed, but Olivia Falconeri (Lisa LoCicero) of the times he pretended to be a birth father to protect children from mob figures! It’s not really all that different, and the important thing, as General Hospital viewers know, is to find the baby and bring her back!

General Hospital (GH) Spoilers: Should Austin And Maxie Give In To Their Feelings? https://t.co/3jS1qO81sf #GH #GeneralHospital

General Hospital viewers can imagine how embarrassing it will be for Maxie as she comes clean to her mother and Anna-the hidden in plain sight cover really wasn’t a bad idea but the secrecy was. After all, Louise would have had all the protection in the world available from trained professionals from the Port Charles Police Department as well as the World Security Bureau if she’d only asked! A proud Maxie wanted to handle it on her own, and she thought she could; and it worked well for over six months – until it didn’t!

General Hospital viewers can expect that Felicia, Anna, and probably Robert Scorpio (Tristan Rogers) and Mac Scorpio (John J. York) will have the same questions once Mac is on the mend! Maxie also didn’t want her family and friends in danger from Peter, but what happened to Mac makes that a moot point!