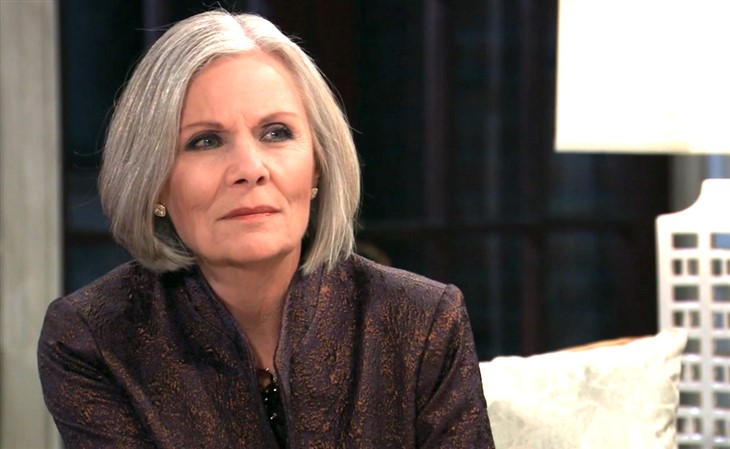 General Hospital (GH) spoilers for the week of February 7, 2022 tease that there are some interesting comings and going to discuss. Once again Tracy Quartermaine (Jane Elliot) has come and gone from the fair city by the docks. Wouldn’t it be grand if she stuck around a little while longer? There is so much story to mine with her character.

She was back all of five minutes before she was busting her granddaughter Brook Lynn’s (Amanda Setton) chops about being a fake baby mama. And she came with news that shook the town to its foundations. Is Luke Spencer (Anthony Geary) really dead? According to Tracy he is, but we have a feeling that a character like Lucas Lorenzo Spencer lives on in infamy somewhere, somehow.

General Hospital Spoilers: The week Of February 7, 2022 Brings News Of A Departure

But according to Tracy Quartermaine Luke is dead as dead can be. After coming to Port Charles, New York with the terrible news, she held a memorial and scattered his ashes out to sea. And thus fans must say goodbye once again to Jane Elliot who has wrapped up her short stint as Tracy, Ned Quartermaine’s (Wally Kurth) mother who has returned to Amsterdam after a close brush with the law.

GH spoilers – The week Of February 7, 2022 Brings News Of A Temporary Departure

Kelly Monaco is temporarily off the canvas as character Sam McCall. She debuted in the role in 2003. But Monaco’s absence does not mean that Sam is out of sight.

General Hospital Spoilers – The week of February 7, 2022 Brings News Of A Temp Recast

Last week fans saw Lindsay Hartley (ex-Theresa, Passions, ex-Arianna, Days) in the role of the PI who has her hands filled with all sorts of conflicts at the moment. It’s been reported that the daytime vet will be back for further episodes. Hartley has previously filled in for Monaco, that was back in August of 2020.

For now Sam is conflicted about her love life. Last week she talked to Damian Spinelli (Bradford Anderson) about her dilemma while they played video games at Maxie Jones’ (Kirsten Storms) house. The gab fest was interrupted with news that Sam’s crush Dante Falconeri (Dominic Zamprogna) was injured and she flew off to be by his side. Is there an epic romance on the horizon for these two? Tell us what you think GH fans!