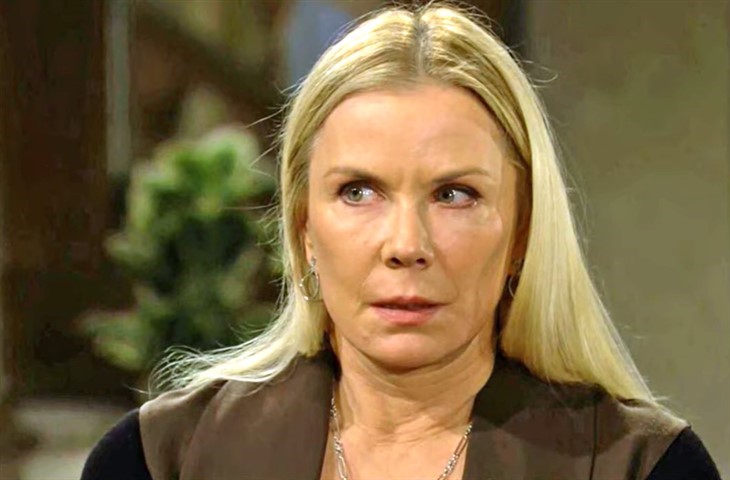 The Bold and the Beautiful spoilers document Brooke Logan Forrester (Katherine Kelly Lang) has been hiding in her mansion for weeks. Viewers know that she has not been herself since the champagne corks were popped.

The castle Brooke lives in is her family home. Ridge Forrester (Thorsten Kaye) will always be her family, even if they divorce again soon.

Meanwhile, Taylor Hayes (Krista Allen) has received information that spells Brooke’s imminent doom. But Taylor’s next move will be crucial because Ridge’s life is about to change dramatically on B&B.

The Bold And The Beautiful Spoilers – Charlie Webber To The Rescue

Charlie Webber (Dick Christie) was the perfect person to write into this storyline. Of course, the audience was in on the Columbo-style mystery, with devoted entertainment viewers knowing that means they knew what Brooke did and are waiting to see how she falls.

Steffy Forrester Finnegan (Jacqueline MacInnes Wood) knew that Charlie was the best possible person to help her prove what Brooke did. It just so happened that Christie’s comic relief character led the installation of a new security system at Brooke’s home in the second half of 2021.

B&B Spoilers – When Will Sheila Carter’s Crimes Be Exposed?

Sheila Carter (Kimberlin Brown) is the known and unknown villain in this sequence. Charlie said that a new security system was installed at the home where Brooke and Ridge live after Sheila reappeared in Los Angeles, California during Steffy and John Finn Finnegan’s (Tanner Novlan) wedding.

Brooke broke her sobriety on New Year’s Eve, and she was with Deacon Sharpe (Sean Kanan) after Hope Spencer (Annika Noelle), Liam Spencer (Scott Clifton), and the children left for the cabin. That was not Brooke’s fault because Sheila made sure that she was drinking alcoholic champagne that Lang’s character believed was the opposite.

Brooke will not be able to rightly claim victim status unless Sheila’s crimes are exposed before or during the anticipated reveal that involves Deacon.

The Bold And The Beautiful Spoilers – Taylor Hayes Takes The Lead

Steffy would probably make an impulse decision if Taylor were not around. But Hayes was hired because B&B wanted to reprise this character for this specific conflict.

Taylor is grounded. Her missionary work provided a new take on life that included getting along with Brooke and respecting Ridge’s marriage.

However, action must be taken because Charlie provided Steffy and Thomas Forrester (Matthew Atkinson) with proof that confirms Douglas Forrester’s (Henry Samiri) complete memory of what he saw his grandmother Brooke doing. Taylor will come to know that Brooke attempted to silence Douglas. That will add to an apparent no-defense plea when Ridge is informed and confronts his wife.