Days Of Our Lives Spoilers: Johnny DiDevil Channels Stefano, Seeks To Be The New Phoenix! 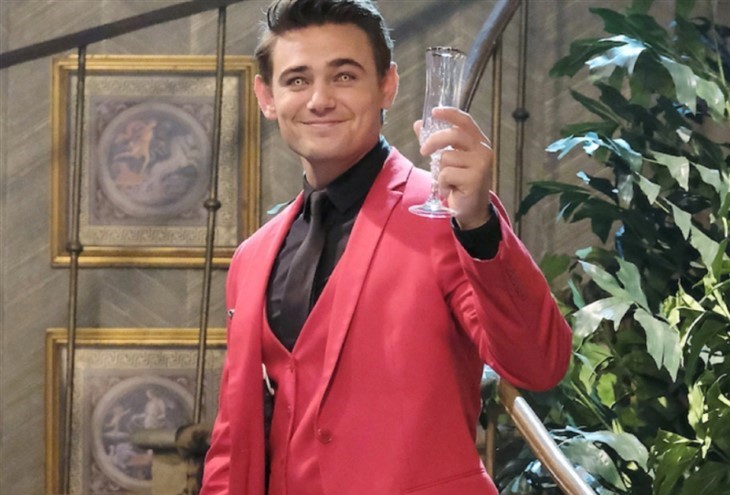 Days of Our Lives spoilers and rumors tease that Johnny DiDevil (Carson Boatman) will channel his nonno Stefano DiMera (Joseph Mascolo) and seek to be the new Phoenix in upcoming episodes of Days of Our Lives!

Days of Our Lives viewers will recall that Johnny constantly stares at the portrait of Stefano and talks to it, but then almost every DiMera does, especially the males. It seems to be a DiMera tradition and a rite of passage to talk to the portrait of the Phoenix. But Days of Our Lives viewers can tell that Johnny, especially when satan shows himself, seems to have a special connection; even though Johnny was a tot when his grandfather passed! Longtime Days of Our Lives viewers will remember it was none other than Stefano who brought, indirectly, satan to Salem years ago when he hypnotized Marlena Evans (Deidre Hall)! The hypnotism made her mind and soul vulnerable to demonic possession!

Days of Our Lives viewers can tell that Johnny craves power, and even though most DiMeras are power hungry anyway, when the devil is in residence, it’s even more so! First, Johnny talked his father, EJ DiMera (Dan Feuerreriegel) into signing over all his DiMera shares to him – just in case he didn’t win the case against him for kidnapping Sami DiMera (Alison Sweeney). Then, Johnny used his devilish powers to make Chad DiMera (Billy Flynn) choke on his own testimony for EJ, and did several other things to ensure EJ would go to prison! It’s plain to most longtime Days of Our Lives viewers that Johnny wants his grandfather’s legacy all to himself, and he’ll do anything to be the top dog! Johnny, with the devil inside him is capable of turning himself into anyone – and that includes channeling Stefano!

Days Of Our Lives Spoilers And Rumors – The Phoenix Must Rise, But There Was No Appropriate Vessel

Days of Our Lives viewers will recall a few years back that Dr. Wilhelm Rolf (William Utay) transferred Stefano’s “essence” via an artificial intelligence chip into Steve Johnson (Stephen Nichols). Stefano wasn’t thrilled about living in Steve Johnson’s body, but there had been no other appropriate vessel. Days of Our Lives viewers will remember that “Steveano” along with Hope Williams (Kristian Alfonso) who again manifested Princess Gina, spent a several months long reign of terror in Salem. The reign of terror ended when Anna DiMera (Leann Hunley) stabbed “Steveano” with a spike heel, and Kayla Johnson (Mary Beth Evans) removed the brain chip. Hope also was restored to herself, and Chad and Tony DiMera (Thaao Penghlis) burned the chip; but thanks to the devil in Johnny, Stefano doesn’t need a chip!

Days of Our Lives viewers may have thought Rolf’s idea to allow the Phoenix to live on was clever, but the devil doesn’t need an artificial intelligence chip – he has access to the real thing! Johnny DiDevil can easily summon Stefano’s soul and life force, and channel him in his own young body! Days of Our Lives viewers know Stefano would not have a problem with sharing his grandson’ body, the grandson who seems to be most like him! Who knows what power the two of them could hold together, and perhaps even take over the world on a whim?