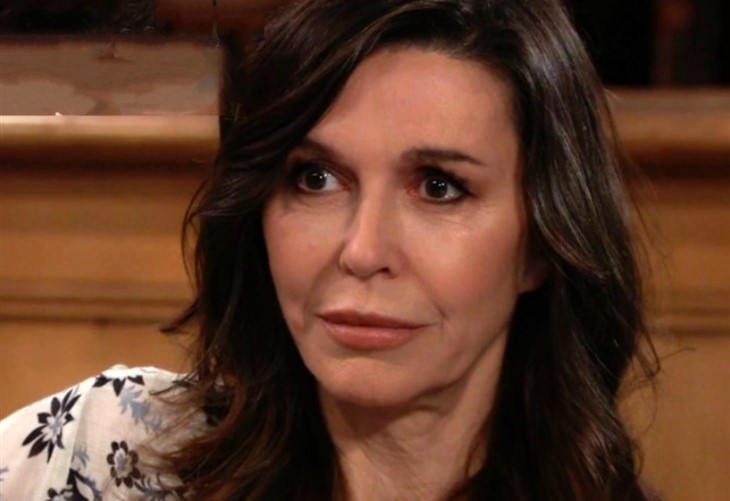 General Hospital viewers will remember Valentin hasn’t been seen since he was chloroformed and stuffed in the back of an SUV. General Hospital viewers remember that both Cassadines found out Bailey Quartermaine is Louise Jones (London and Jett Prinzo-Berendt) at the same time. Victor was in a hurry to deliver Bailey to Peter August (Wes Ramsey) and set up his escape, for which he was to receive from Peter the key to controlling Drew Cain (Cameron Mathison).

Valentin had called Anna and told her he had a lead on Louise, and nothing has been heard from him sense – and Anna knows Peter couldn’t have been responsible so she demands answers from Victor! General Hospital viewers will remember that Valentin disappeared before Peter escaped; that is how Anna knows Peter didn’t kidnap him – at least not himself, he’d have had to have help!

General Hospital viewers know that Anna suspects Victor’s involvement in Peter’s escape – after all, they were working together before; apparently for many years, even when Jason Morgan (Steve Burton) and Drew were kidnapped the first time.

General Hospital viewers will remember that Victor and Peter had worked together to fake Drew’s death and imprison him in Victor’s secret compound on Crete for all those years.

Anna thinks Peter’s turning his back on Victor was just for show, although viewers will recall that Peter did indeed double cross Victor! Valentin’s disappearance immediately after calling Anna about a lead on Louise and then Peter’s escape after the sabotage of the prison transport van to Pentonville absolutely cannot be a coincidence in Anna’s eyes! Anna does not have one single solitary doubt that Victor and Peter are still working together and are responsible for Valentin’s disappearance!

General Hospital viewers know that Anna isn’t the only one who doesn’t trust Victor, Mayor Laura Collins (Genie Francis) would like a piece of him too! She and Anna have discussed at length the immunity deal Victor got from the WSB and the realization that he still has old turncoat WSB agents who are at his beck and call – one of them who was driving the prison transport! Longtime General Hospital viewers know that

Anna was once a double agent for both the WSB and the DVX, but her loyalties were to the WSB; a turncoat like the ones loyal to Victor is a different thing! Anna, Laura and Dante Falconeri (Dominic Zamprogna) have been working on a plan to capture Peter and save Louise, but she shakes down Victor about Valentin first! Anna digs deep into any shred of humanity Victor may possess and point blank asks him if he killed the man he claims is his own son; which Victor of course denies!