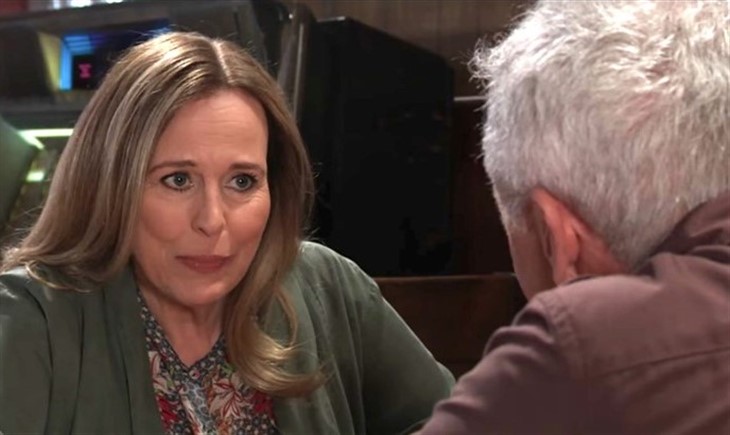 General Hospital Spoilers tease that once Peter August (Wes Ramsey) is dealt with, that Port Charles Mayor Laura Collins (Genie Francis) will immediately have to deal with an even greater threat. Up until now, Victor Cassadine (Charles Shaughnessy) has been lurking on the sidelinesm mostly just providing assistance to Peter, albeit grudgingly, But once Peter is dealt with, the threat that Victor brings will begin to become much more clear.

General Hospital Spoilers – Laura Collins believes that something big is about to happen!

Victor’s arrival certainly put Laura on edge. But then Luke Spencer (Anthony Geary) was reported to have died in a cable car accident in Austria. Laura believed Luke’s death and Victor’s arrival to be a coincidence. But that was before the Ice Princess was discovered to have been stolen from Luke’s possession. Luke and Laura, with the assistance of Robert Scorpio (Tristan Rogers) and others, once stopped the Cassadine family from using the Ice Princess to freeze Port Charles. Laura rightly fears that history may be about to repeat itself.

Laura is likely right to be suspicious. Victor has been saying for weeks that the Cassadines will need to band together in the coming weeks. And rumors have been swirling that instead of a deep freeze, that Port Charles have soon be having an uncharacteristic heat wave in the very near future. It’s unclear if this is the result of Victor’s machinations, but chances are very high. The plan to freeze Port Charles was part of a larger Cassadine plot to blackmail the world’s governments. If the heat wave serves a similar purpose, look for Laura to realize she needs help. The first person Laura would likely turn to would be Robert.

With Luke seemingly out of the picture, Robert is the best person to deal with a bizarre Cassadine plot. In recent days, Robert has been dealing with injuries that his brother, Mac Scorpio (John J York) obtained after being shot be Peter. Robert will certainly be ready to get in on the action. But will it be enough? Luke’s absence will surely be felt so Laura will have to look within herself to find a way to once again take down Victor. Look for an adventure with the very fate of Port Charles hanging in the blanace!

Is Victor once again using the Ice Princess for nefarious purposes. Without Luke, can he be stopped? Can Laura and Robert once again save the day? Anything can happen in Port Charles so stay tuned to General Hospital airing weekdays on ABC. And don’t forget to check back right here regularly for all your General Hospital news, information and spoilers!