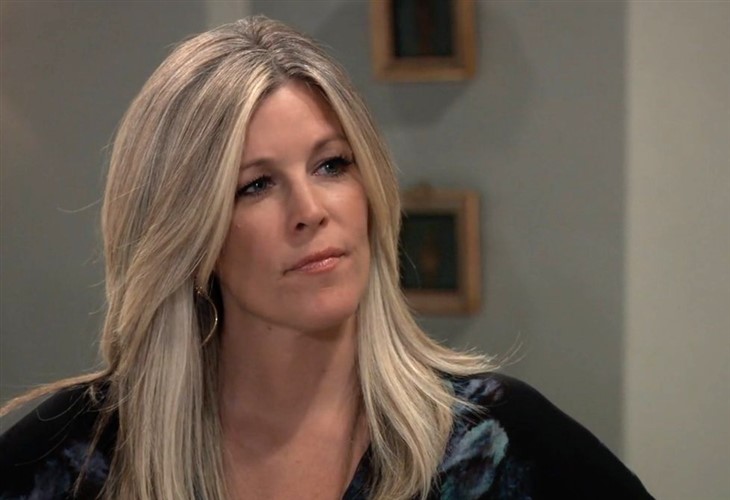 General Hospital spoilers and updates tease that Carly Corinthos (Laura Wright) will set up a life-changing meeting in an upcoming episode of General Hospital: will it be the end of Carson?

General Hospital Spoilers And Updates – Walking In On Sonny Corinthos And Nina Reeves Was The Last Straw For Carly Corinthos!

General Hospital viewers will recall that Carly walked in on what she thought was a beautiful night of remembrance for her, set up by Sonny, but instead walked in on him in bed with Nina Reeves (Cynthia Watros)! That was partly her fault as she had told Kristina Corinthos-Davis (Lexi Ainsworth), Sonny’s daughter, that she had no intention of meeting him on The Haunted Star, where he had set up the surprise.

If an angry Sonny hadn’t thrown his cell phone overboard figuring she’d stood him up, she could have called to let him know about the things that had happened – Dante Falconeri (Dominic Zamprogna) being shot and Peter August (Wes Ramsey) escaping. Instead, she walked in on her worst nightmare and afterwards, General Hospital viewers will recall that she told Drew Cain (Cameron Mathison) there was no coming back from that! Now, Carly takes steps to set up a life-changing meeting.

Longtime General Hospital viewers will recall that Sonny has cheated on Carly before, and Carly has cheated on him too from time to time – but this time it’s different for Carly. Sonny had never slept with Carly’s enemy, and as far as she’s concerned Nina Reeves is the cause of the majority of her problems; Nina was Nelle Benson’s (Chloe Lanier) birth mother and for her, the apple didn’t fall far from the tree!

For Carly, Sonny may have as well been sleeping with Nelle Benson as sleeping with her mother – and she cannot get past the lies and the betrayal, and the public humiliation. Sonny didn’t tell her he and Nina fell in love in Nixon Falls, General Hospital viewers will recall it came out at Nina’s preliminary hearing for fraud charge, from which she was fully exonerated! Carly felt she was made a fool of publicly by Sonny.

General Hospital viewers can expect that Carly will call Diane Miller (Carolyn Hennesy) to initiate divorce proceedings against Sonny, and Diane may tell her not to rush into things too quickly. After all, it has only been a month or two since Sonny turned up alive after being presumed dead for nine months and many things have to happen legally. General Hospital viewers will recall that for one thing,

Carly had Sonny declared dead and that has to be reversed – you can’t divorce a dead man let alone set up any child custody arrangements or property divisions! As Carly’s friend Diane also may tell her she should wait and let her mind calm down and recover from the loss of Jason Morgan (Steve Burton) before she makes major decisions like a divorce. People under emotional and mental trauma, as Carly is, do not make the best decisions and Carly should perhaps pursue legal separation first to give herself time to heal.