General Hospital Spoilers: Nina Apologizes To Valentin For Not Telling Him The Bailey Secret 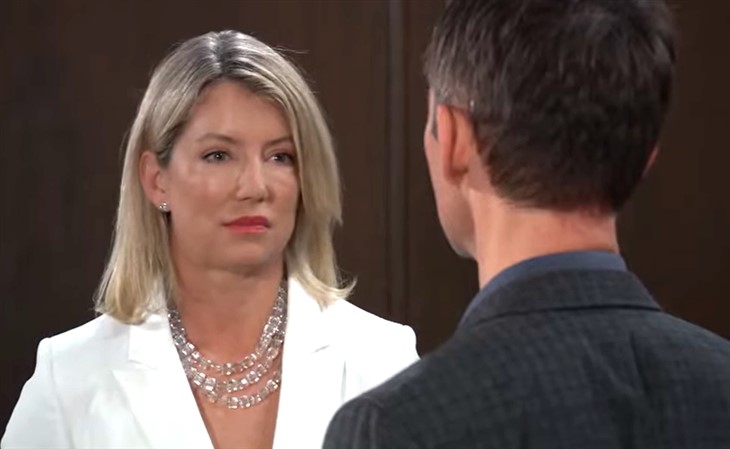 General Hospital viewers will remember that Nina was one of the very few that knew the truth that Bailey was really Louise hidden in plain sight, but she couldn’t tell anyone because Maxie Jones (Kirsten Storms) bound her to secrecy for Louise’s safety. Nina felt bad for her ex-husband when she learned that Brook Lynn Quartermaine (Amanda Setton) had told Valentin he wasn’t the baby’s father, and if she could have told him before he got that attached, she could have spared him some pain.

General Hospital viewers know if Valentin had known Bailey was Louise he also could have protected her, and his and Anna Devane’s (Finola Hughes) many wasted trips looking for a baby who wasn’t kidnapped could have been avoided! Brook Lynn has asked Valentin’s forgiveness – and knowing the truth, he understood – now, Nina feels that she must apologize also- he was so broken when he found out she wasn’t his!

General Hospital viewers know that Brook Lynn explaining to Valentin that Bailey had really been Louise makes it easier for Nina to make her own apology for not telling Valentin earlier. Still, knowing the pain that he went through losing a child he thought was his is fresh to Nina – all those years of knowing she had a child out there somewhere to find out she knew her but didn’t know it was her until she was dead! General Hospital viewers know that Nina didn’t find out Nelle Benson (Chloe Lanier) was her daughter until it was too late –she was dead – but if she’d known sooner, when she was alive maybe she could have made a small difference. That is why Nina feels guilty that she didn’t tell Valentin what she knew about “Bailey” sooner, even though she had the best of reasons to keep the secret. She was trying to protect her from her psycho birth father, Peter August (Wes Ramsey)!

General Hospital viewers will see Nina explain that she had known Bailey was Louise since the start, but she had been bound to secrecy by Maxie not to tell anyone – the fewer who knew, the better. Nina knows that Charlotte Cassadine (Amelie McClain) also lost a little sister she thought was hers, but even she knows the truth now and Valentin tells Nina he already knows.

General Hospital viewers will see Valentin tell her that regarding the Bailey secret she had done the right thing, although he wishes that she had contacted him when Peter showed up in Nixon Falls instead of trying to handle him herself! If he had known Peter was out there alive he and Anna Devane (Finola Hughes) could have hunted him down but he understands she was doing the best she could, given the situation and Peter’s threats! Valentin tells her there’s nothing to forgive, and the baby is now safe – now just to rescue Maxie!