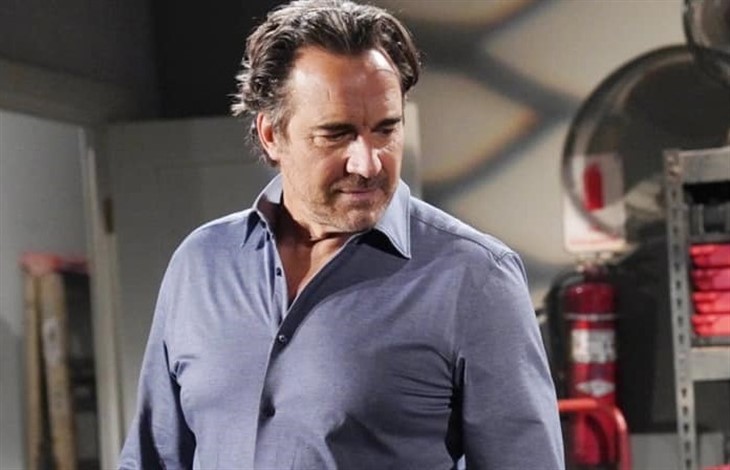 The Bold and the Beautiful spoilers document that Ridge Forrester (Thorsten Kaye) appears to believe that Brooke Logan Forrester (Katherine Kelly Lang) is never the source of any problem. Whatever mistakes are made are always the fault of someone else. In this instance, Deacon Sharpe (Sean Kanan) is to blame.

Ridge punched Deacon in the face. The attack at Il Giordino may be referenced if Deacon chooses to pursue charges. Though it could be problematic for this recently released convict to trust the legal system would work for him against the bold co-Chief Executive Officer of Forrester Creations.

The Bold And The Beautiful Spoilers – Meanwhile, Brooke Logan Forrester Defends Herself

Brooke was crying while she was defending herself. Ridge asked all the right questions and gave her a wide-ranging benefit of the doubt.

To her credit, Brooke was following through on her plan to tell Ridge all that happened on New Year’s Eve. She did not know that Taylor Hayes (Krista Allen) already provided Ridge with plenty of intel, with the intended implication that Brooke and Deacon were involved in a romantic scenario that may have been due to drinking.

Taylor’s later arrival at the mansion evoked a different defense strategy. Brooke naturally does not want Ridge’s lesser love, per his admission, butting into her personal affairs (pun intended).

Ridge’s physical attack was coupled by Taylor’s verbal assault. After hashing out the dilemma with Steffy Forrester Finnegan (Jacqueline MacInnes Wood) and Thomas Forrester (Matthew Atkinson), Taylor decided to do something.

Rather than allow Brooke to be the only voice, Taylor opted to head to the mansion and set her straight.

Taylor is at a disadvantage because Ridge told Brooke that she was the love of his life. His Logan may not be off the hook. But Ridge’s subsequent storm over to Deacon’s place of employment and home implies that he backs Brooke for the moment.

The Bold And The Beautiful Spoilers – Sheila Carter Provokes, Then Bolts

Sheila Carter (Kimberlin Brown) dropped by Deacon’s modest living accommodations in the past. Fans are right to wonder why Hope Spencer (Annika Noelle) has not questioned her dad’s living arrangements or done something about them whenever he is shown in the janitorial closet at Il Giordino.

A typical Sheila moment happened, as she was jabbing at Deacon and ranting on Brooke just before Ridge arrived. As the audience knows, Sheila is responsible for Brooke’s being drunk, and what Lang’s character allowed herself to do.

It is no surprise that Sheila’s actions resulted in Ridge tagging Deacon as the bad guy, believing that he spiked Brooke’s drink. Status quo drama will continue until or if the complete truth comes out on B&B.