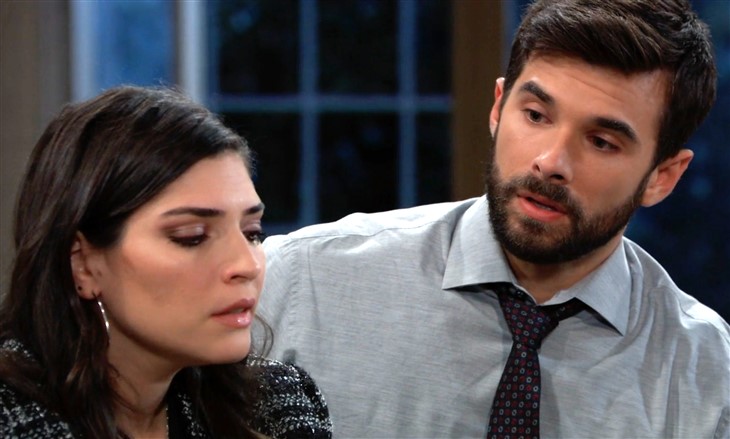 General Hospital viewers will have noticed that not only Brook Lynn, but also Chase had become very attached to the baby that they were raising as their own and named “Bailey”. General Hospital viewers will remember Brook Lynn and Chase’s tears, and Brook Lynn’s panic attack when they realized Peter August (Wes Ramsey) had snatched her out from beneath their very noses! But fortunately, baby Louise was only missing for less than twenty-four hours, as Maxie Jones (Kirsten Storms) met Peter at Pier 55 when he called her to meet him.

She had convinced him she’d go with him to have a new start but without Louise – it was his idea to leave her at the safe place at the fire station. Chase soon got a call from Anna Devane (Finola Hughes) to go to the fire station and identify and pick up Louise, and he was relieved for her but worried for Maxie!

General Hospital viewers can imagine how difficult it will be for Brook Lynn and Chase to give the baby up, as they know they will have to eventually, even though they love her as their own. For now, Louise will be taken care of in a safe place and likely under armed guard, just in case Peter would change his mind and come back for her – with or without Maxie! General Hospital viewers will recall that Felicia Scorpio (Kristina Wagner) is busy tending to Mac Scorpio (John J. York) who is still on the mend after his very serious gunshot wound.

There’s a good chance that Damian Spinelli (Bradford Anderson) might care for her, since he has her other two children and quite possibly might avail himself of one of Sonny Corinthos’ (Maurice Benard) safe houses. Spinelli and the children would be safe there, and have access to the Corinthos family’s guards as well.

General Hospital viewers can expect that it will be a tearful goodbye when Brook Lynn and Chase say goodbye to “Bailey” although they are extremely grateful that her alter ego Louise is now safe! General Hospital viewers will see possibly the two of them together deliver the precious bundle to where and whom with it has been determined that she will be safest.

In a sense, they will grieve “their baby” although she never in actuality existed, but that doesn’t mean that they don’t love her or aren’t emotionally attached, and for Brook Lynn it will probably be the most traumatic. However, the knowledge that she is safe from her psycho father tempers the grief of giving her up – now if only they could rescue her mother and her father be sent far, far away – Steinmauer sounds good – and mother and baby’s reunion could be complete!