The Young And The Restless Spoilers: Team Victoria Or Team Adam – Who Gains Victor’s Favor? 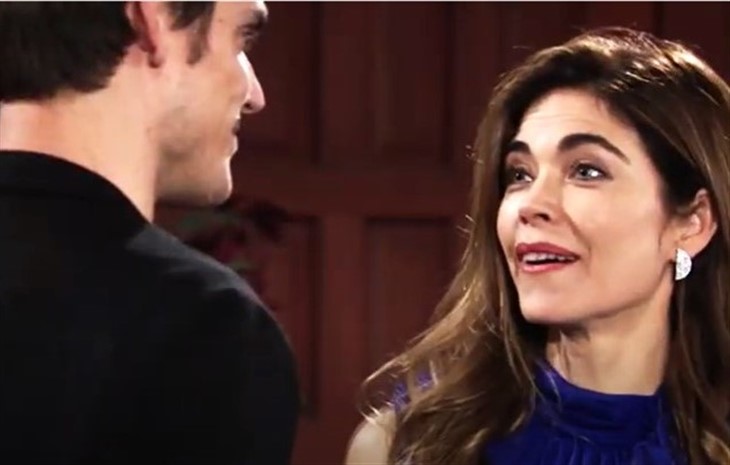 The Young and the Restless spoilers document that Victoria Newman Locke (Amelia Heinle) is allowing herself to be drawn into a power battle with her little brother. Ashland Locke (Robert Newman) is backing his wife, which is partially based on the Peru clinic reveal.

Adam Newman (Mark Grossman) has nothing to lose after losing the sweet deal he had at Newman Media. Sally Spectra (Courtney Hope) is his greenlighted love interest and strategic ally at Newman-Locke.

Meanwhile, Victor Newman (Eric Braeden) has what he wants. His goal has always been to have his children in position to take over when he is gone. Now, two offspring who are willing are on the same team. However, they are not on the same side.

Victoria is not the person she was in daytime days gone by. For one, she looks different than when Victoria (as then played by Heather Tom) and Nick Newman (Joshua Morrow) vied for their father’s approval years ago at Newman Enterprises. And yes, that is a wink to hardcore fans who recall that Tom’s importance in this character’s development is meaningful.

The audience benefited from great casting as Heinle assumed the role in 2005. Tom was chosen to become Katie Logan on Y&R’s sister show, The Bold and the Beautiful, during that decade.

However, there are similarities between Victoria then and Victoria now. She believes that she has earned her way, which is true, and pulls rank as the oldest of Victor’s children and therefore worthy of his and her sibling’s respect.

Adam did so many bad things for such a long period that Victor can never truly trust his son. But he does see many elements of himself within Adam, which is a driving force today.

Sally is a good choice to be Adam’s Chief Operating Officer at the merged Newman Media. What she lacks in high-level executive experience, Sally makes up for in loyalty.

As of now, there is no opportunity for Victoria to co-opt Sally. Heinle’s character is underestimating Adam and his chosen sidekick. That is a mistake, with Ashland seeing the potential for trouble.

Fans often see Braeden seated in the Ranch living room setting. Victor is positioned on the far side of the chessboard, with various piece arrangements in place as he contemplates multiple moves and variations of them.

Victor does not want Victoria and Adam to destroy each other. Chaos is not the intent of the founder of Newman Enterprises.

He wants his children to produce their best work. Victor believes that a combination of Team Victoria and Team Adam happens from the team of rivals’ method he is employing on Y&R.