Days Of Our Lives Spoilers: Will And Sonny Arrive To Warn Craig About Leo! 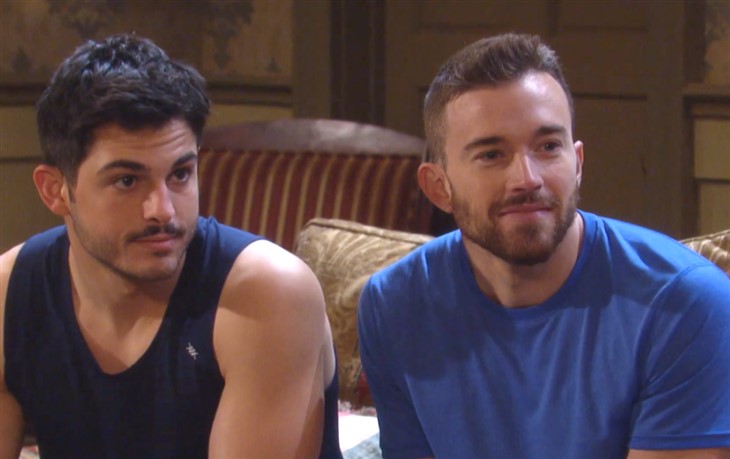 Days of Our Lives spoilers tease that Dr. Craig Wesley (Kevin Spiritas) has had a late in life revelation that he is sexually attracted to men. This will likely end his decades long marriage to Nancy Wesley (Patrika Darbo). But Craig has fallen in love with Leo Starke (Greg Rikaart), who on his best day is a liar and a con artist. As Will Horton (Chandler Massey) and Sonny Kiriakis (Zach Tinker) well know from the many encounters with the man.

Although Sonny was thrilled that Will was alive and well, he didn’t remember the love he shared with Sonny at first. So while Will moved on, Sonny was alone and finally decided to try a dating app. Unfortunately, Vivian Alamaine (last played by Linda Dano) hired Leo to seduce Sonny so he could spy on Titan Industries for her. During a confrontation with Will and Sonny, Leo hit his head on the fireplace mantle and seemingly died. Will and Sonny covered up the crime and it turned out Leo wasn’t dead after all. However he blackmailed the couple with tales of attempted murder.

Days Of Our Lives Spoilers – Leo Starke Was Will Horton’s Informant!

Sonny and Will eventually reconciled and eventually moved to Arizona, which is where they next encountered Leo. While Will was working on a story involving the Alamanian Peacock, Leo was his informant. Since Will couldn’t give Sonny the details of the story, Sonny believed Will was having an affair, and when he discovered Leo in the hotel room Will paid for, the truth finally came out. Leo made himself a nuisance in Sonny and Will’s lives, but he did get them to finally lighten up and have some fun.

Leo decided to steal the Emerald that was supposed to be a part of the Alamanian Peacock. He replaced the emerald with a fake and turned it in to the ISA. And by doing so, Leo saved the world because the Peacock was actually a doomsday device that would have destroyed several cities, including Salem. But because the emerald was fake, the machine didn’t’ work properly.

Once Will and Sonny find out about Craig and Leo’s romance, they will certainly rush to Salem to warn Craig about Leo’s less than reputable past. But Craig will surprise everyone when he reveals that he already knew. Viewers may remember that Craig himself was quite a schemer himself when he lived in Salem before, so nothing Will or Sonny says will change how Craig feels. But does Leo really love Craig or has someone once again paid Leo to date someone. It would be devastating to Craig is Leo isn’t on the up and up after Craig blew up his own marriage to be with Leo!

Should Will and Sonny tell Craig about Leo’s past? Are they just out for revenge or are they worried Craig will be taken in? What is Leo really up to? Anything can happen in Salem so stay tuned to Days of Our Lives airing weekdays on NBC. And don’t forget to check back right here regularly for all your Days of Our Lives news, information and spoilers!