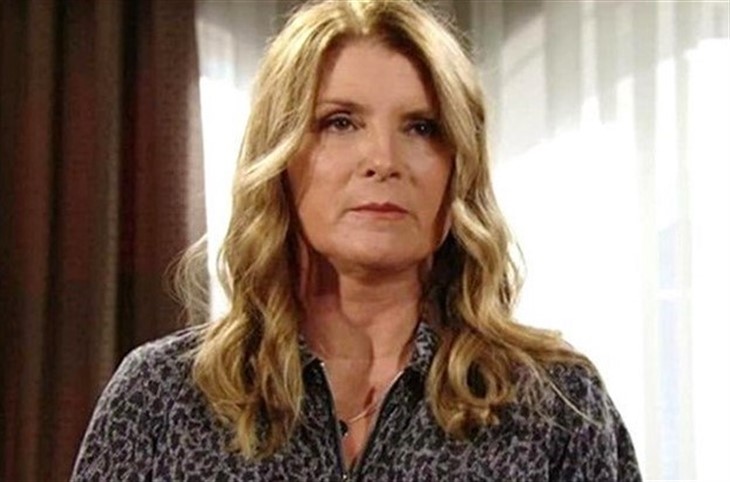 The Bold and the Beautiful spoilers document Sheila Carter’s (Kimberlin Brown) delight in knowing Brooke Logan Forrester (Katherine Kelly Lang) got what was coming to her. This highly subjective response is based on Brooke foolishly threatening to prevent Sheila from having a relationship with John Finn Finnegan (Tanner Novlan).

Brooke’s humiliation, which took place in front of Deacon Sharpe (Sean Kanan) toward the end of last year, led to Sheila’s revenge play. Switching champagne labels on bottles that contained alcohol and others targeted Brooke.

Sheila has been impatiently waiting to learn if her ploy was successful. Deacon has served as an unaware information source, telling Sheila about the drama that has ensued.

Was Brooke wrong in lambasting Sheila? Yes, but that did not give Sheila a license to supply an alcoholic with disguised alcohol.

A skilled attorney could have Sheila prosecuted and put behind bars, where she belongs, for this incident. It is criminal that she decided to counter Brooke’s overly harsh verbal statements by exploiting her disease.

Monstrous is just one of many adjectives that used for Sheila. She is sick, as her ex-husband, Eric Forrester (John McCook), said during Finn and Steffy Forrester Finnegan’s (Jacqueline MacInnes Wood) wedding reception.

Sheila did not care who else she hurt when planning to send a bottle of alcohol-based champagne to Brooke’s home, which was intentionally labeled as non-alcoholic. Brooke was the first victim, Deacon Sharpe (Sean Kanan) was the second.

Deacon is one of the only people in Los Angeles, California, who talks with Sheila. While he is afraid of her reputation, Deacon also feels sorry for the predicament with her son.

But did Sheila take into account that Deacon could become collateral damage? No. Again, monstrous.

Sheila has insisted that she is a better person. Finn has heard that on numerous occasions. So has Steffy and her mother, Taylor Hayes (Krista Allen).

Longtime fans know that Sheila has gone unpunished for some of her horrible actions through the years. But the audience also knows that Sheila’s ego and connected reckless behavior is the tripwire that could do her in.

The Bold And The Beautiful Spoilers: Liam Tricks Steffy, Reports Intel Back To Brookehttps://t.co/tOed0gEx7X#theboldandthebeautiful #boldandbeautiful

Brown’s character deserves her comeuppance, a term Sheila used in Brooke’s regard. Hopefully, that happens as soon as possible. If not, she is sure to cause more harm to others based on her history of reprehensible behavior.