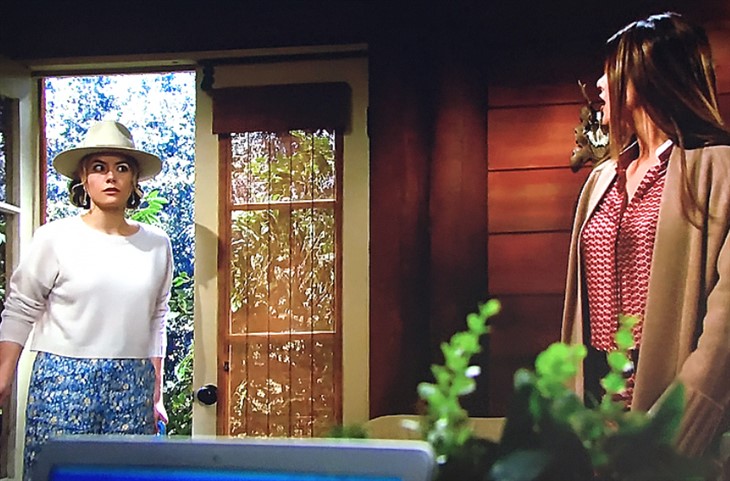 The Bold and the Beautiful spoilers document that Steffy Forrester Finnegan’s (Jacqueline MacInnes Wood) instinct was proven right. Brooke Logan Forrester (Katherine Kelly Lang) created a scandal and hid it from her husband.

Steffy and Hope reached a soapy peace accord within the last year. While their history with Liam Spencer (Scott Clifton) will forever make each leery of the other, all had been going rather smoothly until Deacon Sharpe (Sean Kanan) was released from jail and accepted Hope’s offer to meet her at the cabin.

Liam Spencer (Scott Clifton) is not being compared to Ridge Forrester (Thorsten Kaye), as a character, in the subject header. Devoted fans know that the comparison between both men includes their place at the center of triangles.

One of B&B’s greatest of all-time (GOAT) romantic rivalries was Brooke, Ridge, and Taylor Hayes (as originally played by Hunter Tylo and now played by Krista Allen). A meaningful portion of this show’s screen time was devoted to the battles both ladies had with each other over the man they love more than any other.

One of B&B’s greatest modern romantic rivalries was between Steffy, Liam, and Hope. In more recent years the back and forth eventually caused Steffy’s descent into prescription pain-killer abuse. But John Finn Finnegan’s (Tanner Novlan) presence was and remains the stabilizer that prevents Steffy from desiring a reunion with Hope’s current husband.

Recent years allowed a natural shift in focus from Steffy, Liam, and Hope’s feelings about their triangle to a matured awareness of what is best for the children.

Becoming parents allowed Steffy and Hope to rethink the proper use of their energies. They decided to not be like their mothers, endlessly fighting old battles that were centered on Liam.

Steffy and Hope are both raising two children. The added wrinkle of Douglas Forrester (Henry Samiri) being Thomas Forrester’s (Matthew Atkinson) son with the late Caroline Spencer (Linsey Godfrey) played directly into the conflict that exploded. Douglas’ eyewitness account exposed what happened between Brooke and Deacon.

Steffy is all-in now. She believes that Brooke’s latest invented problem gives Taylor the best chance she has had in years to reclaim the life Lang’s character stole.

Hope is outraged at Steffy’s insertion of herself into Brooke’s personal life, which is a Brooke-like idea to have, as it leaves Ridge somewhere outside of the equation. However, Deacon’s connection to this drama is unavoidable.

As is true of all well-developed storylines, multiple layers, involving numerous other characters, provide a longer period to address and attempt to resolve the drama. Brooke, Deacon, Ridge, and Taylor also means Steffy, Hope, Liam, Thomas, Finn, the children, along with other Forrester’s and Logan’s are part of the fallout on B&B.