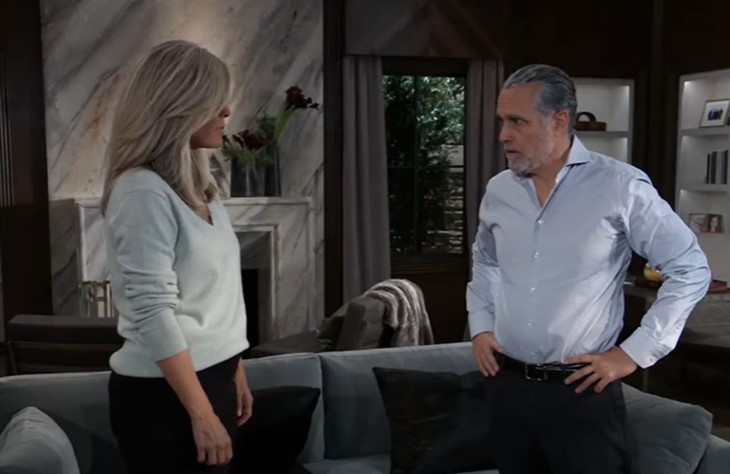 General Hospital (GH) spoilers and updates tease Sonny Corinthos (Maurice Benard) is having trouble with his marriage. Sonny has been trying to get his wife Carly Corinthos (Laura Wright) back. Carly has been upset that Sonny had fallen in love with Nina Reeves (Cynthia Watros) in Nixon Falls. Sonny had planned to give Carly a grand romantic date but thought that she was not going to come.

Sonny found himself turning to Nina when she came instead. Carly came but she found that Sonny and Nina had slept together. Sonny is going to have a harder time winning back Carly. Sonny and Carly have been getting support and advice from Josslyn Jacks (Eden McCoy) and Michael Corinthos (Chad Duell) in their efforts to make their marriage work.

General Hospital Spoilers: Nina Apologizes To Valentin For Not Telling Him The Bailey Secret

Sonny has been trying to get Michael to understand his position. Michael has been upset that Sonny has not wanted to bring Nina to justice. Michael and everyone in Port Charles believed that Sonny had been killed. Nina knew that Sonny was alive and did not tell anyone. Sonny had amnesia but did not feel like he was Nina’s victim. Michael is going to be upset that Sonny was with Nina. Micheal is going to be furious with Sonny over his betrayal of Carly. Michael may feel that Carly will not be able to forgive Sonny for being with Nina. Michael may tell Sonny that it would be best for Carly if he lets her go. Sonny may not like the advice that he gets from Michael but may need to take it.

Carly is trying to understand the feelings that Sonny has for Nina. Carly had decided to meet Sonny and try to work on their marriage. Carly was devastated to find Sonny in bed with Nina. Carly has been getting support for her problems with Sonny from Joss. Joss has been worried about Carly and wants what is best for her. Carly may tell Joss about what happened with Sonny and Nina. Joss will want Carly to do what will make her happy. Joss knows that Carly loves Sonny but knows that Carly may not be able to get past the fact that Sonny was with Nina. Carly has been struggling to understand the connection that Sonny and Nina have. Joss could tell Carly to take her time to decide if she wants to leave Sonny. Joss would want Carly to be in a good relationship.

General Hospital Michael and Joss are worried about Carly. Michael and Joss want to support Sonny but have been having a difficult time believing in him. Michael cares about Sonny and wants him to be happy. Michael cannot understand that Sonny has feelings Nina. Michael knows that Sonny still loves Carly. Will Michael be the one that helps Sonny get the clarity that he needs to decide between Nina and Carly? Joss wants to stand by Carly. Joss wants Carly to decide if she can let Sonny back into her life. Can Joss help Carly to figure out if her future is with Sonny? Be sure to catch up on everything happening with GH right now. Come back here often for General Hospital spoilers, news, and updates.