The The Bold And The Beautiful Spoilers: Team Brooke Or Team Taylor? – Ridge Can Choose A Side 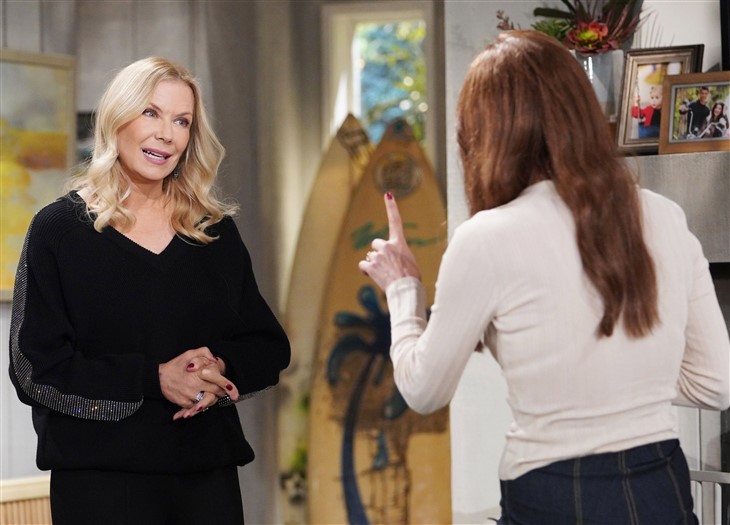 The Bold and the Beautiful spoilers document that Brooke Logan Forrester (Katherine Kelly Lang) is afraid she lost her soul mate. Viewers know that she was tricked into drinking alcohol, which led to all the drama that has unfolded.

Taylor Hayes (Krista Allen) kept her opinions out of Ridge Forrester’s (Thorsten Kaye) marriage until she confronted Brooke about what happened with Deacon Sharpe (Sean Kanan). Taylor was also restraining her children from piling on their father after he returned from the terrible fight he had with Deacon at Il Giordino.

Those who oppose Brooke, like Steffy Forrester Finnegan (Jacqueline MacInnes Wood) and Thomas Forrester (Matthew Atkinson), claim that she can not escape the pattern of behavior she has exhibited for decades.

The Bold And The Beautiful Spoilers: Ridge Crosses The Line – Deacon Motivated To Win

Brooke causes drama, turns on the waterworks, as Steffy said, begs Ridge’s forgiveness, and then he forgives her. Brooke’s kiss of Bill Spencer (Don Diamont) in the cabin in the recent past has been followed by her kissing Deacon and then waking up aside from him the next morning. The viewers know nothing happened more than sleep, but that is not the main point.

But the main case to be made against Brooke was, incredibly, by Brooke herself. She admitted to Ridge that she could not explain why she keeps breaking trust.

Taylor has been fully supportive of Ridge’s latest marriage to Brooke. Latest is the correct adjective to use, as devoted fans know these legacy characters have been married and remarried many times.

The case against Taylor can be argued from at least two interesting angles. It is not that she has done anything wrong against him. She has not. Instead, it is the decade and a half-plus gap.

If Ridge truly loved Taylor Hayes, why has he called Brooke Logan the love of his life?

Ridge decided Brooke in the heat of the daytime moment. After having a rough, two-round physical battle with Deacon, Ridge said he can not do this anymore. He meant continuing to ride the roller coaster that Brooke drives.

It does feel as though Brooke is right. She felt a shift in Ridge’s backing after she told him that Deacon had done nothing wrong. Viewers know that was wrong because he pledged his love to Brooke and made a play for her after New Year’s Eve, which she did not sternly reject.

Whether Ridge is capable of thinking, considering the blur of this complex situation, or Sheila Carter’s (Kimberlin Brown) actions are revealed, which would add to everyone’s perspective, is to be seen on B&B.