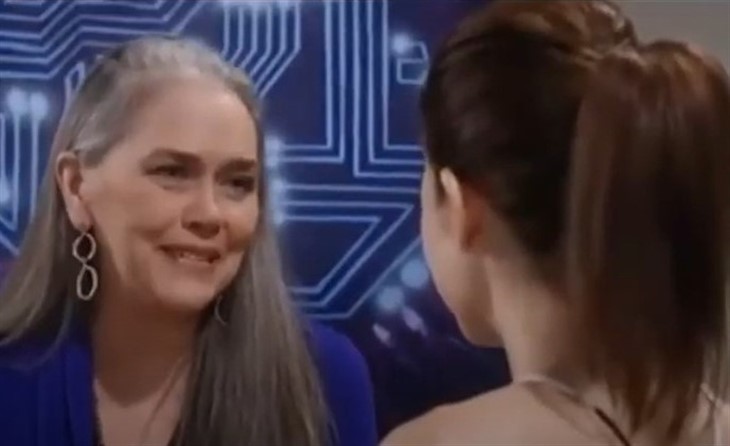 General Hospital’s Liz Baldwin (Rebecca Herbst) has some very freaky things going on right now with no explanation. Now that Liz has received a letter from Betsy Frank (Deborah Strang), or so she believes, has she found her stalker? Is Betsy stalking Liz or is it someone pretending to be her?

General Hospital’s Betsy was the nurse that took Franco Baldwin (ex Roger Howarth) home as a baby to raise him as her own. Of course, fans know that Betsy had Drew Cain (Cameron Mathison) for a while as well. Unfortunately, Franco was molested trying to keep Jim Harvey (Greg Evigan) from bothering Drew. When the boys were three, Drew had a head injury that Franco thought he caused.

Franco was told that Drew was dead until he discovered the truth as an adult. Franco even gave Liz’s son to Betsey as a baby. However, Franco and Betsy had issues over her lies about Drew. Franco and Betsy’s relationship was never the same. Would Betsy try to keep Liz from moving on with her life? That is highly unlikely considering that Betsy did nothing but lie to him in the end.

GH Spoilers – Heather Webber Could Be The Stalker

General Hospital’s Heather Webber (Robin Mattson) was Franco’s birthmother. Franco and Heather were close at one time. However, Franco and Heather fell out when he was engaged to Carly Corinthos (Laura Wright). Although Franco and his mother made up, their relationship was never quite the same. Heather would be a person who would stalk Liz but she hasn’t been seen for a while. Could Heather be stalking Liz?

General Hospital Spoilers – Is The Stalker Something More Serious?

General Hospital has done a DID story more than once. Is it possible that Liz is stalking herself? Could Liz be sabotaging her relationship with Finn because of what happened to Franco? Is Liz secretly afraid to move on with someone new? Hayden Barnes (ex-Rebecca Budig) could be the stalker as well. Perhaps Hayden is lurking in the background trying to stay hidden but wanting to keep Liz and Hamilton Finn (Michael Easton) apart. Fans know that Hayden loved Finn when she had their daughter. However, Hayden left to keep Finn out of her illegal issues. Hayden has not been seen after Nikolas Cassadine (Marcus Coloma) ran her out of town. Could Hayden be alive and well?

Whoever is stalking Liz needs to reveal themselves pretty soon so this stalking story can come to an end.