General Hospital Spoilers: Laura Has A Serious Talk With Esme About Her Attitude! 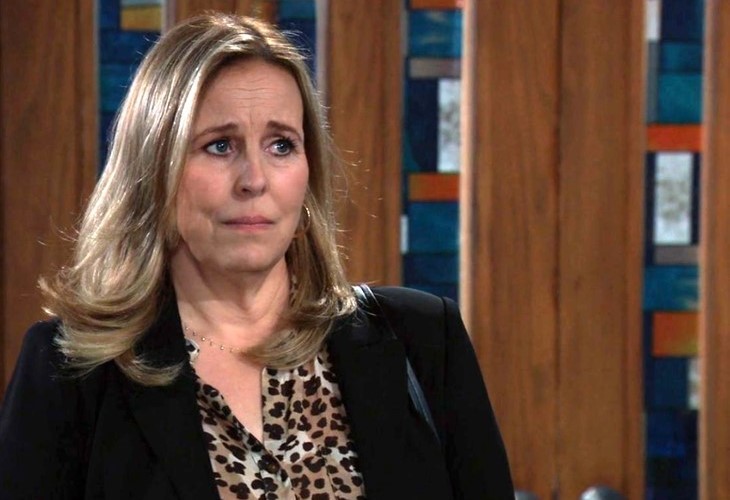 General Hospital spoilers and updates tease in this week’s General Hospital sneak peek, Laura Collins (Genie Francis) has a serious talk with Esme Prince (Avery Kristen Pohl) and her flippant attitude about being late certainly is not endearing her to Laura!

General Hospital viewers see Laura already impatiently waiting at a table in the Metro Court, and tells Laura that she certainly intends to have a wonderful time, adding that she’s famished! General Hospital viewers can tell that Laura is not at all happy with Esme’s flippant attitude, and sits down, telling her she’s also positively late; Esme asks her “Am I?” and then apologizes.

Esme then puts on airs, saying that in France they say “It’s le quart d’heure de politesse“ then explains it means “the quarter hour of politeness”, so the host has time to compose him or herself. Laura is not impressed – and tells Esme she is familiar with the phrase, but the thing is they are not in France and Laura is not giving a party, which is the true situation the French version of “fashionably late” might apply to!

General Hospital viewers know that Laura is the Mayor of Port Charles, and with that comes a certain decorum and respect – which did not happen in this case; even the age difference between Laura and Esme should have commanded some respect from the selfish young girl! General Hospital viewers see Laura remind Esme that she was left waiting alone for her in a public place – which does not look good for a public figure like Laura!

Laura looks sterner and sterner and more and more annoyed as Esme flippantly tells her when she’s waiting for someone she looks at fashion pages on her phone, and asks if Laura has her phone! Laura is obviously offended that Esme is talking to her like she was some schoolmate and not a much older woman, let alone a public official, and she impatiently tells Esme that is not the point!

General Hospital Spoilers – Things Have Got To Change!

General Hospital viewers know from Laura’s previous discussion at home about Esme with Kevin Collins (Jon Lindstrom) that Esme and her attitude of entitlement grate on Laura’ s nerves; she does not have the manners of a houseguest! General Hospital viewers will recall a previous episode where Laura may have actually been impressed with Victor Cassadine (Charles Shaughnessy) – the one where he ignored Esme and acted like she was a maid – Laura might have even laughed!

Laura tells Esme that she has held her tongue as long as she possibly could, but that now the two of them need to have a serious discussion, because some things need to change-Esme, as expected, raises her eyebrows as if thinking who does Laura think she is!

General Hospital viewers can expect that Laura will lay down some rules about Esme’s behavior, and possibly give her some manual labor type chores because Esme definitely needs to be taken down a notch! If Esme thought Victor was dismissive, and displayed a “bad attitude” just wait until Laura lays down the law!