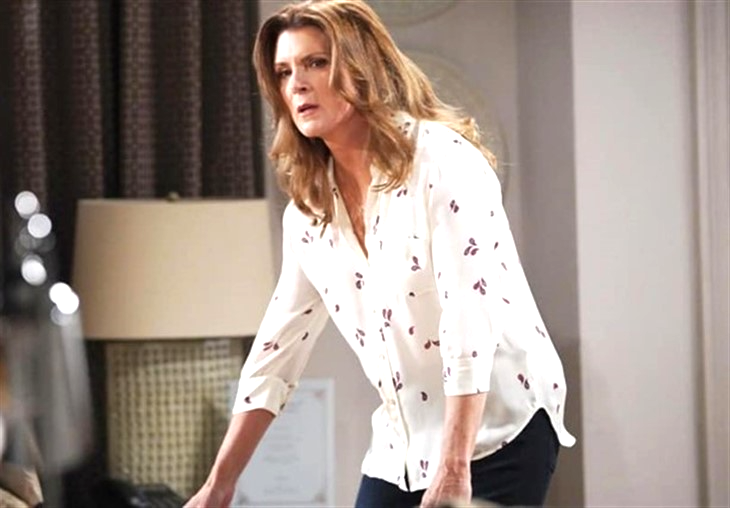 The Bold and the Beautiful spoilers document that Sheila Carter (Kimberlin Brown) is keeping the truth about why Brooke Logan Forrester (Katherine Kelly Lang) began to drink from the world. The scheme Sheila employed succeeded beyond her deepest, demented dreams.

Brooke made a mistake that came back on her hard. She humiliated Sheila while threatening her. Telling Sheila that she would not be allowed to see John Finn Finnegan (Tanner Novlan) or his family was a mentally undisciplined mistake.

Unlike Sheila, Brooke should have worked behind the scenes. She popped off to Sheila in front of Deacon Sharpe (Sean Kanan), with calamitous effects following, as Brooke and Ridge Forrester’s (Thorsten Kaye) marriage soon collapsed.

The Bold And The Beautiful Spoilers: Zende Impacted By Carter’s Decision – Paris Moves On

The subject header is not intended to deflect the full spotlight away from the actions Brooke engaged in with Deacon. While not the end of the world or even an intended betrayal, what she did was wrong.

It was also wrong of Brooke to believe that she held sway over Sheila where Finn, Steffy Forrester Finnegan (Jacqueline MacInnes Wood), and Hayes Forrester Finnegan (Samantha Worden and Piper Harriet) were concerned. That arrogance caused Brooke to conclude that Sheila had no family rights when she does.

But Sheila’s delight in Brooke’s misery is also wrong. Sheila used her free will to provide alcohol to an alcoholic. End of ballgame where moral issues are concerned.

All seems lost at the moment. But all will not be over until divorce paperwork is realized. After Ridge presumably does that, there will still be plenty of plot time for this legendary couple to reconcile.

Yes, Taylor Hayes’ (Krista Allen) is Ridge’s increasingly likely replacement for Brooke. But Taylor is slow-walking her re-connection with Ridge because she does not want to be hurt, meaning that she is well aware of his past patterns of behavior.

No matter what Sheila did or continues to do. No matter what progress Deacon or Taylor makes with Brooke and Ridge, respectively. Brooke is a survivor.

The Bold And The Beautiful Spoilers – Deacon Sharpe Must Remain Measured

Deacon used martial art techniques when fighting Ridge. One of them was to allow his enemy’s momentum against himself. That is what Deacon has been doing these past months.

Fans of Kanan know that he has written motivational books. During a recent interview with B&B’s supervising producer Casey Kasprzyk on the internet-based interview show, Bold Live, Kanan discussed the concept of playing the long game in a fight against an opponent.

It appears as though this soap’s writing staff is tapping into some of Kanan’s off-screen experiences in developing his on-screen alter ego. If Deacon remains emotionally measured, he has a chance to recreate a relationship with Brooke on B&B.