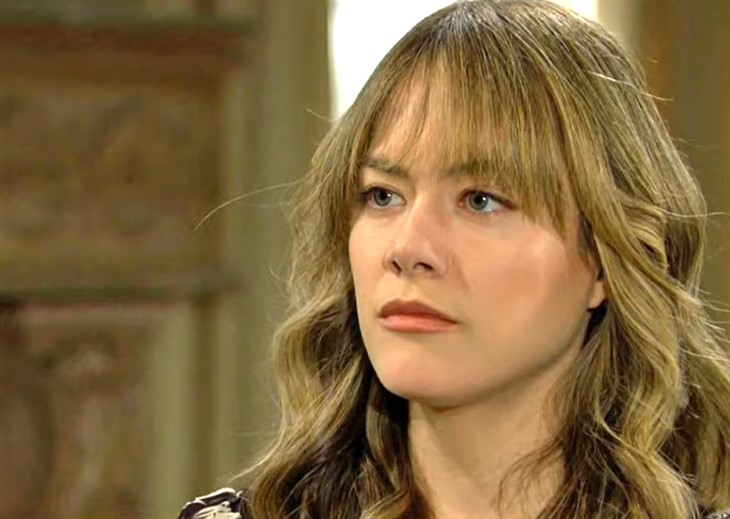 The Bold and the Beautiful spoilers document that Hope Spencer’s (Annika Noelle) concern for her mother has increased many times over. The apparent end of Brooke Logan Forrester’s (Katherine Kelly Lang) marriage to Ridge Forrester (Thorsten Kaye) is being facilitated by Steffy Forrester Finnegan (Jacqueline MacInnes Wood).

Steffy has been open about her desire to see her parents reunite. Hope brushed off Steffy’s enduring gripe about the Logan’s always winning. But that apt backstory point is arguably right or has been until this winter.

The Bold And The Beautiful Spoilers – Hope Spencer Has No Defense

The only counter Hope has to Steffy’s comments about Brooke’s latest, self-created drama involves excuses. Hope can not defend her mother’s behavior with Deacon Sharpe (Sean Kanan).

Also, writing Brooke’s actions off as only due to her impairment is weak. Steffy recognized the vulnerable position Brooke put herself in and sensed that her father was coming around to a point of view that Wood’s character, Thomas Forrester (Matthew Atkinson), and Taylor Hayes (Krista Allen) have long held.

Brooke’s drama led to her downfall. So, Hope blaming Steffy’s support of Ridge smacks as wrong.

Taylor has been living with Steffy since returning to Los Angeles, California. She feels comfortable and loves being with Steffy and John Finn Finnegan’s (Tanner Novlan) grandchildren.

Steffy is a powerbroker on B&B. But she fully respects and honors her mother, taking Taylor’s advice when significant decisions need to be made.

There is no way that Steffy would have ever agreed to allow Sheila Carter (Kimberlin Brown) into the cliff house on Christmas Eve. But Taylor’s reasoned suggestion, about observing Brown’s character and providing an opportunity for potential redemption, proved effective to date.

Ridge might temporarily live with Taylor at the cliff house. If this reviving pairing stays together, they are likely to get a place of their own soon.

In the meantime, it will be interesting to see if Sheila requests another visit with the Finnegan’s. Based on her potentially fully realized reunion with Ridge, Taylor could be generous and even suggest that type of invite to Finn.

Sheila stayed away from Finn for decades, per his father’s (Jack Finnegan, Ted King) request. So, Sheila arguably proved to be sincere about her son’s welfare.

Her history could be used to make the case for another controlled encounter, which would also allow for further, desired observation of any progress she is believed to have made. Of course, only the fans know what Sheila did to Brooke, and that would add to the intrigue of said prospective meeting.