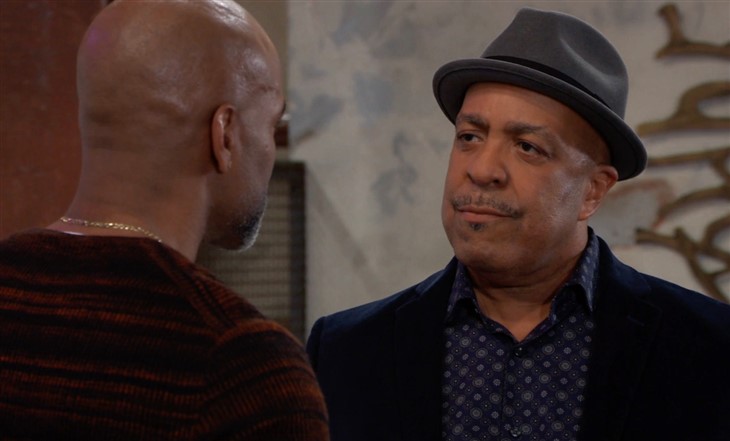 General Hospital Spoilers – Technically, It Was Drew Cain’s Idea But Curtis Ashford Went Along With It

General Hospital viewers will recall that Drew Cain (Cameron Mathison) had an idea to get information on Marshall’s past whereabouts and activities, thinking if he offered him a job he might put some information on the job application Drew could search out. Even if he put down a fake social security number or a fake driver’s license number, it’s possible that he had used it for his fake identity for all those years, and there may be a paper trail.

General Hosptial Spoilers – Felicia Wants To Go Back To Being PI

But as General Hospital viewers will recall, Marshall saw right through it – and even thought Drew thought of the idea, Curtis went along with it and that’s why Marshall is upset with Curtis! Marshall has told Curtis from the start that the reason he didn’t want to talk about his past was that the danger was still out there and he didn’t want it to come to Port Charles and his family!

General Hospital viewers can see why Marshall would be offended, and take it that his son doesn’t trust him – after all, he told Curtis as much as he was going to tell. This situation could wind up being a deal-breaker between Curtis and his father ever having any type of a trusting relationship – because Marshall feels like Curtis has been going behind his back.

General Hospital viewers know that Curtis has been doing exactly that, because he just will not leave well enough alone; and his auntie Stella Henry (Vernee Watson) even told him to let Marshall alone about it and leave it alone!

There is obviously more that she knows than she is telling, but Curtis knows better than to tangle with her about it, but she’s not got a lot of respect for Marshall doing things like he did, either. But then, when Marshall left his wife and his boys, Stella had to leave behind the love of her life to help out with them, and she’s been single ever since; she probably has a grudge against Marshall for all of that!

General Hospital viewers might see a showdown of sorts between father and son as Marshall confronts Curtis over his sneaky ideas, knowing he was at least in the know about Drew’s phony job offer! Well, at least Marshall assumes it was phony – although Drew may actually have found him something to do to make some money, possibly something around Aurora Media which he should be coming back to soon.

General Hospital spoilers will remember that Aurora is the company that Drew and Sam McCall started together, before she chose to go back with Jason Morgan (Steve Burton) and that Michael Corinthos (Chad Duell) took over when Drew disappeared. Even if Drew only had a janitor job available, it would have required a job application and a background check, and that’s what threw red flags up for Marshall! He comes down hard on Curtis and his sneaky ideas to find out information that Marshall claims would be dangerous for him to know!