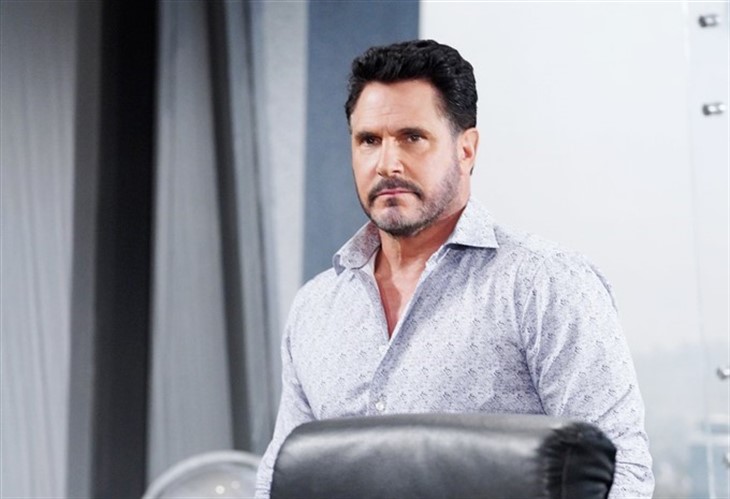 Devoted fans were wondering who would help Brooke to pick up the pieces following the looming fallout. Deacon Sharpe (Sean Kanan) wants to be that guy and believes he is in the top consideration slot.

Brooke called Eric Forrester (John McCook) for help when Ridge did not return. McCook’s character was her first husband and still serves as a trusted advisor. But Bill has a mystique that can not be denied.

Ridge repeatedly expressed his contempt for Deacon since the time in the plot when Kanan’s character was released from jail and arrived at Hope Spencer (Annika Noelle) and Liam Spencer’s (Scott Clifton) cabin. Ridge also said that Deacon represents Brooke’s greatest scandal.

However, hardcore B&B fans know that Bill is the person that Ridge dislikes more than anyone else. Diamont’s character infamously ordered Justin Barber (Aaron Spears) to drop Ridge in the Gulf.

That horrifying dip in the water did not result in Ridge’s death. Kaye’s character survived and has often reminded his main rival about that incident. Bill has no remorse.

Katie Logan (Heather Tom) and Bill love each other. But Bill has caused Katie great pain. So, she has been unable to convince herself to take him back.

Bill has done all he can to prove personal growth. But last year’s incident, where Vincent Walker (Joe LoCicero) set Liam Spencer (Scott Clifton) up for murder, reinforced the opposite. That misguided plot had Vinny purposely walking in front of Bill’s car, that he allowed Liam to drive, with Diamont’s character in the passenger seat on that fateful night.

The result of the above means Bill is single. But Katie is as well. Fans also recall Katie has been badly hurt by Brooke’s connection to Bill, who he seems to love more than Tom’s character.

The Bold And The Beautiful Spoilers – Brooke Logan Forrester Bonds With Husband’s Rival?

Ridge was perplexed by Brooke’s inability to recognize the danger Deacon represents. Ridge wanted to believe she was being too kind-hearted rather than purposely involving herself with someone who created drama in her life many years ago.

The Bold And The Beautiful Spoilers: Zende Impacted By Carter’s Decision – Paris Moves On https://t.co/VckA3thpsw pic.twitter.com/CPMrBR5QA3

However, Ridge will not see any reconciliation Brooke pursues with Bill similarly. He is a bad guy, with a history of trouble. So, if Brooke revives the past with Bill, a classic B&B rivalry will stand to be renewed as well.