Days Of Our Lives Spoilers: The Truth Comes Out To Tripp About Allie 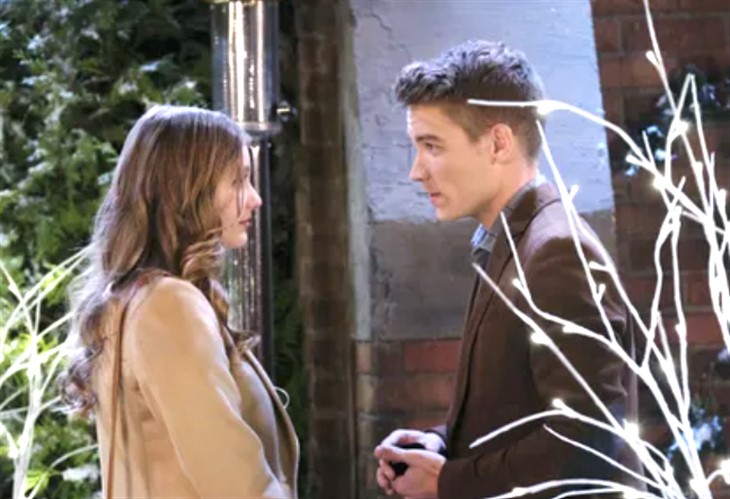 Days of Our Lives spoilers and updates tease that Tripp Johnson (Lucas Adams) will find out an inconvenient truth about Allie Horton (Lindsay Arnold) thanks to Johnny DiDimera (Carson Boatman) in an upcoming episode of Days of Our Lives!

Days of Our Lives viewers will see Allie preparing for Tripp’s impending marriage proposal by having a talk with her best friend Chanel Dupree (Raven Bowens) before the proposal takes place. Of course, as Days of Our Lives viewers can imagine, Allie is feeling guilty for having indulged in grief sex with Chanel the night that Johnny dumped her publicly at a gathering intended to have celebrated their recent marriage!

Tripp had previously shared with Chanel that he intends to propose that evening, and so Chanel of course gives Allie a heads up, considering what had happened between the two of them previously. Allie struggles with herself whether to tell Tripp about her sleeping with Chanel or not, as she feels very guilty about what happened, and she doesn’t want to start a marriage with lies. Allie feels compelled to confess to Tripp about what happened that night, even though it was only a one-time thing and neither her nor Chanel ever expect it to happen again.

Days of Our Lives viewers will see that Allie will accept Tripp’s proposal, and the heirloom engagement ring his mother Ava Vitali (Tamara Braun), and as soon as she does, and everything is happy and good, Johnny shows up and Chanel is with him. Days of Our Lives viewers will see Johnny blurt out that Allie and Chanel slept together, much to the shame and embarrassment of both Allie and Chanel, as Chanel is attempting to congratulate the newly engaged couple!

Guilt, rage, sorrow, frustration and anger hit both Allie and Chanel at once, and Chanel even tries to save the engagement by telling Tripp that Johnny’s lying, but Allie can tell by the look on Tripp’s face it’s already too late! Allie is in shock that Johnny even would know, let alone that he would tell this just as she and Tripp announced their engagement – she can’t deny it to Tripp, that would just be another lie!

Days of Our Lives viewers can imagine that Allie’s and Tripp’s special evening has turned into a nightmare as Johnny keeps giving his special reports, and tells Tripp that he overheard the two women talking about having made love the night of his and Chanel’s wedding reception. After, Tripp takes Allie to a place that they will have some more privacy and she reluctantly admits Johnny was telling the truth, although she tries to stress it wasn’t because she and Chanel are in love or even desire.

It was only a one-time thing that never should have happened, but it did as she was trying to comfort her friend after Johnny’s devastating actions at their wedding reception – it was more of a grief sex thing. Unfortunately, that one time Tripp saw Allie and Chanel in a girl kiss must have stayed with him, because he breaks off the engagement and takes back the ring – he doesn’t believe her! Tripp believes that deep down Allie really wants to be with Chanel, or the sexual faux pas would never have happened, and Allie feels like she’s in the middle of a nightmare!