Days Of Our Lives Spoilers: Exit Stage Left-Where’s The Devil Going Next? 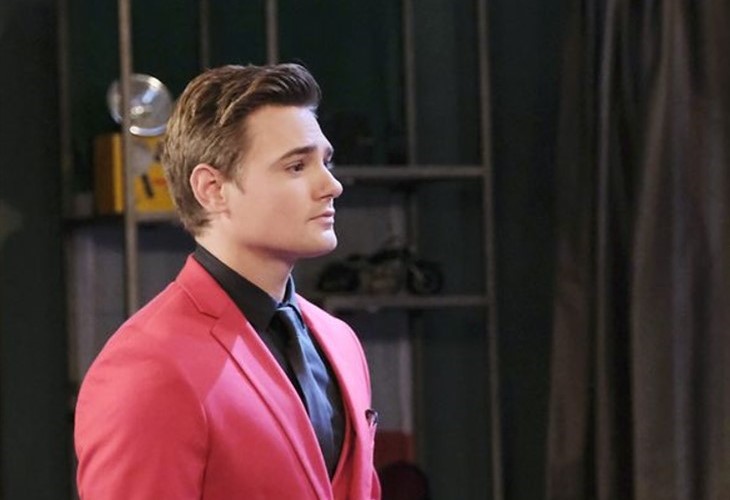 Days of Our Lives (DOOL) spoilers and updates tease that once the devil jumps out of Johnny DiMera (Carson Boatman) he’ll need a new place to land. Until a way is found to permanently evict satan from Salem, Days of Our Lives can expect he’ll wreak havoc for a long time!

Days of Our Lives viewers will recall from a recent Days of Our Lives episode that Ben and Ciara Weston (Robert Scott Wilson, Victoria Konefal) and Julie Williams (Susan Seaforth Hayes) figured it out – the cross Julie sent over with Johnny keeps turning upside down! Ben, Ciara and Julie talked over who else was at Marlena Evans’ (Deidre Hall) recent exorcism who the devil might have jumped into after being cast out of Marlena, remembering the devil left Doug Williams (Bill Hayes) then went into Marlena.

Days Of Our Lives Spoilers: The Truth Comes Out To Tripp About Allie

They discussed who was there, and given Johnny’s made some bizarre moves lately, decided that Johnny was the most likely for the devil to have inhabited, especially considering it was Johnny who likely drew the devil back to Salem with the movie he was trying to make! Days of Our Lives viewers will remember the thought was rather disturbing for them – especially since the devil had desired to jump into Baby Weston!

Days of Our Lives viewers know that no one may be safe from the devil’s possession once he decides to leave Johnny – Johnny DiDevil may be ending a short term run! He’ll still be wreaking havoc this next week, but who knows after the week of February 28-March 4 – he does a lot of damage in the next few days however, breaking up Tripp Johnson (Lucas Adams) and Allie Horton (Lindsay Arnold) for one. One person who can definitely see evil in Johnny is Jake DiMera (Brandon Barash) who’s been noticing a whole lot of confusion, especially with Gabi Hernandez (Camilla Banus) who Johnny’s been flirting with!

But Days of Our Lives should remember the devil usually doesn’t jump “ship” without a plan – he started in Salem in Doug Williams (Bill Hayes) but his end game was Marlena – and even though she thinks she’s safe now, he could even target her! Or here’s another prime candidate – TR Coates (William Christian) is Johnny’s investor and promoter for his movie – satan might want to give old TR a front row seat, and Paulina Price (Jackeé Harry) thinks he’s bad now?!

Days Of Our Lives Spoilers – Who Else Might Satan Target For Possession?

Days Of Our Lives viewers wonder who else might satan target for possession, even though he’s had a great ride with Johnny, and really pulled off some satanic stunts and created a lot of havoc! He could jump into people known for evil around Salem – people like Clyde Weston, (James Read) Ava Vitali, (Tamara Braun) or even Gabi might be an easy move.

Johnny’s been trying to get her into bed and sexual contact is one way the devil uses to possess – every incubus needs its succubus, after all, he could just empower Gabi and they could be a demonic duo! Or, Days of Our Lives viewers know that the devil may choose an innocent to hide in, where no one would ever suspect; a child living in Salem for instance. Or, he might jump into someone who’s bizarre and make him even more so – can you imagine what might happen if satan jumps into Leo Stark (Greg Rikaart)?!