B&B Spoilers: Sheila Implicates Herself In Brooke’s Fall From The Wagon While Arguing With Thomas; Will He Tell? 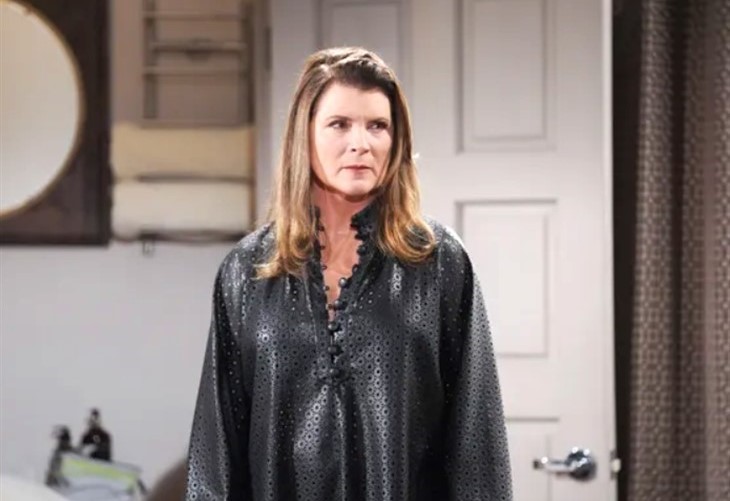 Viewers of The Bold and The Beautiful will recall in a previous episode of The Bold and The Beautiful, that Sheila slipped up and said too much as she was talking to Thomas’ mother, Taylor Hayes (Krista Allen). Sheila was telling Taylor that now she could have her husband back, and things got a little worked up between the two of them and she told Taylor about Brooke’s threats to make sure Sheila never saw her son or grandson again!

The Bold And The Beautiful Spoilers: Liam In Crisis Turns To Bill And Wyatt For Help

Taylor perceptively acknowledged to Sheila that she seemed to have a personal interest in Brooke and Ridge Forrester’s (Thorsten Kaye) breakup and obviously thought she may have had a personal involvement in it as well! Brooke’s threats to Sheila that day obviously are still on Sheila’s mind as while arguing with Thomas she lets slip that Thomas’ parents wouldn’t be together if it wasn’t for her-she even thinks Thomas should thank her!

B&B Spoilers – Thomas Forrester Asks Sheila Carter What She Did

Viewers of The Bold and The Beautiful then will see Thomas stop the argument briefly, as he asks Sheila what she did, and how is she responsible for Brooke and Ridge’s breakup, and Sheila stumbles a bit as she realizes what she’s done. Specifically, Thomas wants to know what she meant about “tripping Brooke so she’d fall off the wagon” and Sheila has to think of something to cover quickly, because that sounds very incriminating!

Viewers of The Bold and The Beautiful will see Sheila momentarily at a loss for words, causing Thomas to become even more suspicious of what she is talking about, and he starts asking some pretty probing questions! Sheila says it came out wrong and it was meant as only a figure of speech – and then pushes it off on Deacon Sharpe, (Sean Kanan) telling Thomas that she did a little matchmaking that night, and Thomas sees right through it but doesn’t let on to Sheila! Thomas knows what happened the night his son saw Brooke kissing Deacon, and Sheila’s narrative doesn’t fit!

Viewers of The Bold and The Beautiful know that Thomas is now faced with a decision – whether to tell one of his parents about Sheila’s slip up and that he thinks she may have been involved in Brooke’s fall from grace! Thomas considers that what he tells could possibly make his father more sympathetic towards Brooke, and he and his sister want Ridge to stay with Taylor, not go back to Brooke, the woman who has hurt him over and over again!

The Bold And The Beautiful Spoilers: Deacon Out To Be A Hero For Brooke https://t.co/e1X9NhfFQ6 pic.twitter.com/jyL5cuE8N3

But, as viewers of The Bold and The Beautiful know, this is something Thomas doesn’t think he can hold back and he decides to tell his mother, not wanting to give his father an excuse to feel sorry for Brooke! Taylor’s interest is piqued when Thomas tells her that he and Sheila had an intense argument outside the house as he was trying to keep her out and she implied she had something to do with “tripping Brooke and making her fall off the wagon”. Taylor recalls her and Sheila’s conversation earlier where she seemed to brag about the breakup and she agrees that this slip of the tongue warrants further investigation!