Days Of Our Lives Spoilers: A Worried Jennifer And Jack Wait To Hear About Abigail 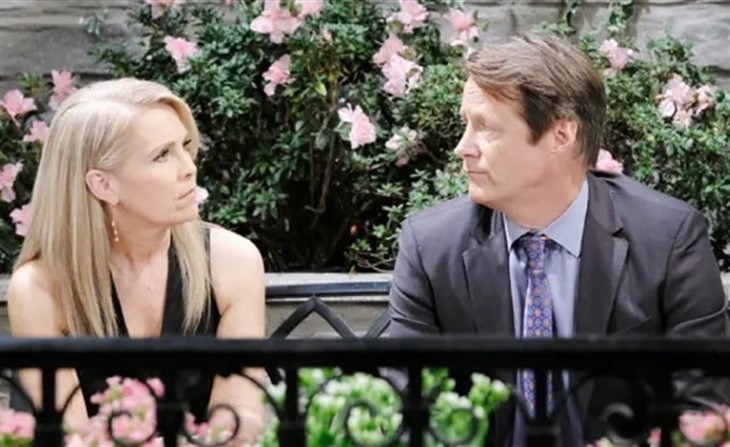 Days of Our Lives spoilers and updates tease that a worried Jennifer and Jack Deveraux (Melissa Reeves, Matthew Ashford) will wait to hear news about their daughter Abigail Deveraux DiMera (Marci Miller) in an upcoming episode of Days of Our Lives!

Days of our Lives viewers will recall that Chad and Tony DiMera (Billy Flynn, Thaao Penghlis) were able to get information leading them to the island where Kristen DiMera (Stacy Haiduk) had Abigail and several others from Salem hostage. Chad and Tony took the DiMera plane, where they were able to find all of the hostages, and Chad and Abigail have a very happy reunion, and Tony finds out Sarah Horton (Linsey Godfrey) thinks she is Renee DuMonde (Philece Sampler)!

Sarah flies into his arms, so that’s an awkward experience for him, but it is soon explained what has happened to her so he tries to be gentle and humor her within reason. Days of Our Lives viewers can imagine how worried that Jack and Jennifer are waiting back in Salem waiting for a call to let them know their daughter is okay! It has been a rough several months indeed for the Deveraux and DiMera families, and Jack and Jennifer are ready for some good news!

DOOL Spoilers – It Won’t Be Long Now, Rescue In Process

Days of Our Lives viewers know that it won’t be long now, and the rescue is in process; it isn’t sure if Patch and Kayla Johnson (Stephen Nichols, Mary Beth Evans) will come back on the DiMera plane or not. They’re trying to bring Kristen back to justice, but it looks like Sarah will definitely be along for the ride when Chad, Tony and Abigail come back, and Days of Our Lives viewers can imagine that Tony will probably hope Sarah falls asleep on the plane!

Abigail tries talking some sense into Sarah, but it doesn’t work considering Sarah was rather much of a blank slate when she first arrived on the island, which made it easy for her to take on Renee’s identity. Kristen had given her an old diary of Renee’s she had found, so this definitely is the same island where Tony was held captive for so many years, so many years ago. Meanwhile, Jack and Jennifer are hoping for a status update!

Days Of Our Lives Spoilers – The Call Comes, Much To The Deverauxs’ Relief

Days of Our Lives viewers cannot imagine that Chad or possibly Abigail herself won’t give Jack and Jennifer a call to let them know that they are on their way back, their rescue mission having been successful! Finally a call comes, and Jack and Jennifer are relieved to know their girl is fine and she, Chad and Tony are on their way – with Sarah, who Abigail was trying to find.

Days of Our Lives viewers can imagine that Abigail will explain Sarah’s condition when they all arrive home, because it will be a delicate situation – especially when it comes to telling Maggie Kiriakis (Suzanne Rogers). Sarah had been injected with a syringe of the same Dr. Wilhelm Rolf (William Utay) concoction that only two drops in a drink put Abigail in a psychosis that took several months to cure! They will make sure Sarah gets treatment as soon as possible.