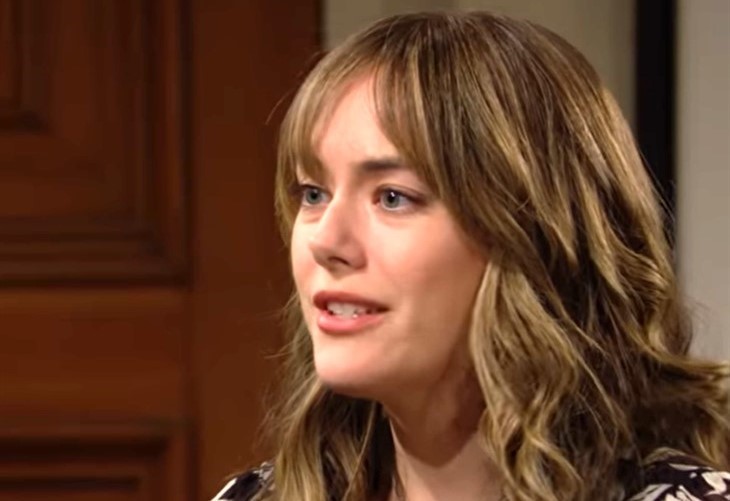 The Bold and the Beautiful spoilers document that Hope Spencer (Annika Noelle) had a good talk with her dad. She convinced Deacon Sharpe (Sean Kanan) to try and save Brooke Logan Forrester’s (Katherine Kelly Lang) marriage.

Ridge Forrester (Thorsten Kaye) was not open to Deacon’s unexpected plea, seeing it as part of a game. But Deacon again demonstrated his love for Brooke and Hope in being willing to try and persuade the man who attacked him that he should return to his wife.

Fans who were hoping the latest edition of the Brooke and Ridge show was canceled continue to hold their collective breath. Ridge did tell Brooke they were over, left the mansion, and moved into the guest house on the cliff house property. Yes, he still loves Lang’s character more than Taylor Hayes (Krista Allen).

The Bold And The Beautiful Spoilers: Liam In Crisis Turns To Bill And Wyatt For Help

Brooke’s unplanned meeting at Taylor’s psychiatry office included a verbal throw down. She told her rival that Ridge was her husband and Taylor was not going to be allowed to take him from her.

Ridge says that he feels safe with Taylor and their children. But he is not known to have filed divorce paperwork.

B&B Spoilers – Deacon Sharpe Does What He Can

Deacon is not responsible for what happened between him and Brooke on New Year’s Eve. Each person shares a portion of the blame.

Sheila Carter (Kimberlin Brown) set that soapy ball in motion as devoted fans know. She continues to encourage him to make a play for Brooke.

Having done what he could to encourage Ridge to reconcile, Deacon later reasserts his love for Brooke. It is an open question as to whether she will be open to exploring what they once had, as Hope’s birth came from that highly-dramatic period in plot time.

While Ridge told her that she will always be his Logan, Brooke knows that Taylor has played this situation wisely. Allen’s character did not interfere, to any great degree, in Ridge’s marriage until after learning about Brooke and Deacon.

The Bold And The Beautiful Spoilers: Liam In Crisis Turns To Bill And Wyatt For Help https://t.co/Bc6rK2f3Gj pic.twitter.com/7NEJnZmiN5

Taylor also made a smart decision in blocking Ridge from fully re-committing to her at the cliff house, which was after he left Brooke. Taylor could be hurt, as Brooke forcefully said, knowing that Ridge’s vulnerability means he is not thinking straight or can make strong life decisions right now.

With Brooke’s hold over Ridge broken or, at the very least, severely damaged, Deacon has an opening he did not think possible.

Brooke will recognize the sincerity of Deacon’s feelings for her when she learns what he encouraged Ridge to do. How much that impresses her or what comes of it is yet to play out on B&B.