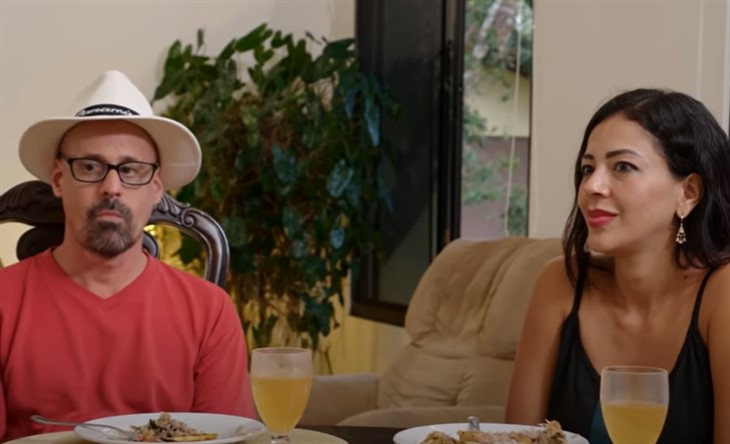 As fans already know, 90 Day Fiancé star Gino Palazzolo likes to keep his hat on. While fans already know the reason (his baldness), in a sneak peek for Sunday’s episode his hat and other things make a bad impression on Jasmine Pineda’s mom.

Gino Palazzolo already doesn’t have things easy with Jasmine Pineda. This was especially so when it was revealed that he had sent her private nude images to his ex. Naturally, Jasmine was furious and shocked, but it looks like she has gotten over that and is giving the relationship a go. So far, 90 Day Fiancé fans can’t see a future for this relationship, but it does seem he has won her back.

However, a teaser for Sunday’s episode sees the American getting in trouble with Jasmine’s mom. The couple is visiting her parents’ home in Chiriquí for a meal and to meet the family, but he quickly put her mom’s nerves on edge, what with the big age gap and all.

Gino’s time in Panama is quickly coming to an end, but he plans to get engaged to Jasmine before heading home. He has already bought a ring for the American Lit teacher, and now, he is the first man since Jasmine’s ex, to meet her mother. According to Jasmine, her mother is “very traditional” and religious. Meanwhile, her mom is only one year older than Gino himself.

In the last episode, Jasmine was preparing Gino for the family meeting and told him he must take his hat off as a sign of respect while her mother is praying.

90 Day Fiancé: Before The 90 Days Spoilers – Gino Palazzolo Keeps His Hat On At The Dinner Table

Despite her warning, Gino ends up upsetting Jasmine’s mom in a teaser for Sunday’s episode. However, before this, Jasmine’s mom wants to know why Gino doesn’t have children at the age of 51. After Jasmine translated the question, Gino said awkwardly that it just never happened to him.

Meanwhile, Gino’s mom points out that when Jasmine was born, Gino was the same age as Jasmine’s 18-year-old sister, Liz. However, Gino said he didn’t see a problem with that as there are many couples out there with large age gaps. Jasmine does stick up for Gino, saying he is a nice man and that he loves her. Despite this, her mom is clearly not pleased. Gino then admits he is feeling tense, while he makes matters even worse by keeping his hat on as the family sits down for their prayers before eating.

Readers, what do you think about Gino hiding his bald head under a hat? Let us know your feelings by dropping a comment below.