Days Of Our Lives Spoilers: Brady And Chloe Plot To Expose Leo To Craig 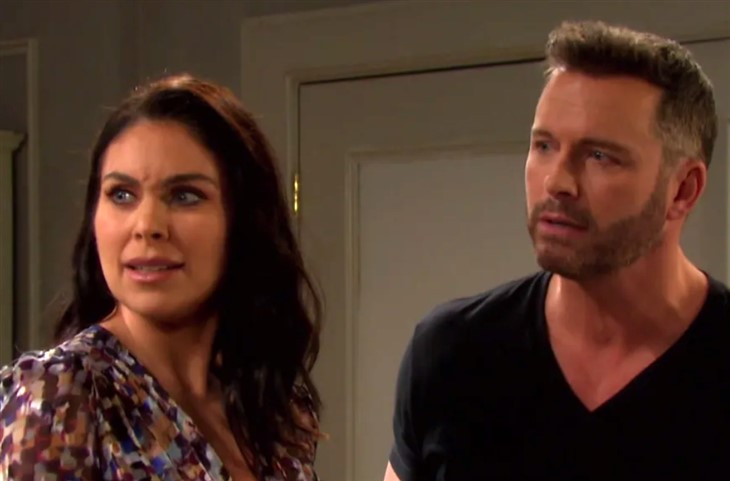 Days of Our Lives spoilers and updates tease that Brady Black (Eric Martsolf) and Chloe Lane (Nadia Bjorlin) will plot to expose Leo Stark (Greg Rikaart) to Craig Wesley (Kevin Spirtas) in upcoming episodes of Days of Our Lives!

Longtime Days of Our Lives viewers know that Brady has very good reasons for saying that Leo is a snake, and is fearful that he’s pulling a scam on Craig to get his money! As a doctor with a huge practice and able to finance many medical convention trips, Brady figures Leo smelled money the minute he met him, and Chloe is fearful of the same thing even though she wasn’t in Salem the last couple of times that Leo was.

Days Of Our Lives Spoilers: No One But Craig Loves Leo

Longtime Days of Our Lives viewers will also remember the last time Leo was in town, with his mother Diana Cooper (Judith Chapman) that she tried to scam Brady’s father, John Black (Drake Hogestyn) claiming he was Leo’s father! She nearly killed Marlena Evans (Deidre Hall) by putting penicillin in a gift of macarons, still obsessed with John after many, many years, and based on that, Brady decides to try to get John involved! John’s reaction is totally unexpected since he is open minded and thinks maybe Leo has made some efforts towards redeeming himself!

By this time, after Brady and Chloe tried to warn Craig about Leo when they had a dinner date with them, Days of Our Lives viewers can imagine that they’re kind of stumped. Craig obviously has it so bad for Leo, he can’t see the forest for the trees, and Brady and Chloe know that they have to do something to make Craig believe them! Days of Our Lives viewers can imagine that Brady and Chloe will do some serious brainstorming trying to find some way to keep Craig from being another one of Leo’s victims, which they are absolutely sure that he will be!

They know they have a monumental task ahead of them, because when someone is so infatuated with someone they cannot see their faults, they just won’t listen to anything negative about their object of affection! Brady and Chloe both agree this is infatuation on Craig’s part, they refuse to even consider that it could be the true love that he describes it as-Craig actually thinks that Leo is his Mr. Right!

Days Of Our Lives Spoilers – Danger, Danger, Craig Wesley – Will Horton And Sonny Kiriakis To The Rescue!

Days of Our Lives viewers will recall the h-e- double hockey sticks that Leo put Will Horton (Chandler Massey) and Sonny Kiriakis (Zach Tinker) with his schemes. For one, Leo blackmailed them for attempted murder with a photo of him rolled up in a rug and them putting him in a car trunk – they thought he was a goner after he’d fallen into a fireplace!

Apparently he’d just been temporarily knocked out and he returned later and blackmailed Sonny into a marriage he didn’t want, because he was in love with Will! Days of Our Lives viewers can be sure that when Brady and Chloe tell Will and Sonny about Craig’s dilemma they will be glad to pitch in and try to save him, also involved with that scam was taking over Titan!