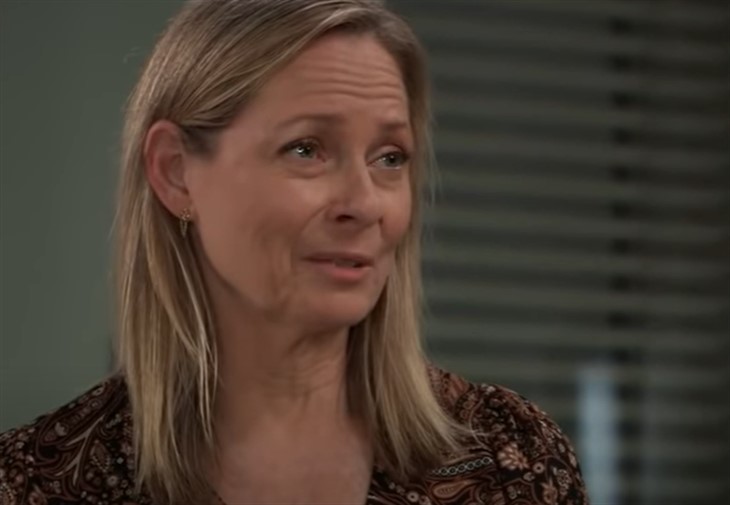 General Hospital spoilers and updates tease that as Brando Corbin (Johnny Wactor) and Sasha Gilmore (Sofia Mattsson) are lost in the woods near Niagara Falls, Gladys Corbin (Bonnie Burroughs) will panic, as she can’t reach Brando! Will she send out a rescue party in upcoming episodes of General Hospital?

General Hospital viewers will recall from a recent General Hospital episode, that while on a vacation at Niagara Falls, Sasha talked Brando into getting married that day, and they set out to find a wedding chapel. The only problem was that apparently they didn’t have good directions, an outdated map, and apparently spotty cell phone service because they got lost, and it sounds like they have gotten so lost they can’t find their hotel either!

Brando and Sasha find themselves having to improvise, possibly having to sleep in the woods because it has gotten dark, and there is a good possibility they may have set out on foot! Meanwhile, back home in Port Charles, Brando’s mother, Gladys, is freaking out because she hasn’t heard anything from Brando and cannot reach him by phone; Gladys is a worrywart anyway but it’s doubtful that Brando would have called her to let her know they reached Niagara Falls, she may not even know about the trip!

General Hospital viewers will recall when Gladys first came to Port Charles she claimed her son was dead when Sonny Corinthos (Maurice Benard) wanted to use him as a father for Dev Cerci’s (Ashton Arbab) fake identity. General Hospital viewers will remember that Gladys herself told the family that Brando died in a war overseas, when later it turned out he’d done some time for drugs – this coming out when he arrived some time later. Since that time it seems that Gladys has done a one hundred percent turnaround and is overprotective over Brando – although the death of her grandson Liam Mike Corbin (uncast infant) might have a lot to do with that!

However, Brando is a grown man and can make his own decisions and live his own life, and after so much intrusion by Gladys into their lives when Sasha was pregnant, it is no surprise if Brando didn’t inform Gladys about the trip. However, he or Sasha should have let someone know their plans and where they would be in case of an emergency!

Chances are, Gladys will call the Port Charles Police if she doesn’t hear anything from Brando in the forty-eight hours that is usually required before filing a missing persons report, assuming she doesn’t know about the trip. General Hospital viewers can expect that if she does know, she might still contact the police to send out a search party, which would have to be done in connection with the national park service.

Otherwise, if Brando and Sasha didn’t let anyone know of their plans, which with Gladys’ past intrusiveness, they may not have, a trace may have to be put on one or both of their cell phones to try to get the latest location! Gladys may not even know that he and she are together, so there will be limited information that she can provide, but at least maybe the last cell tower Brando’s phone pinged off of can be ascertained! This is starting to sound like a job for Damian Spinelli (Bradford Anderson)!