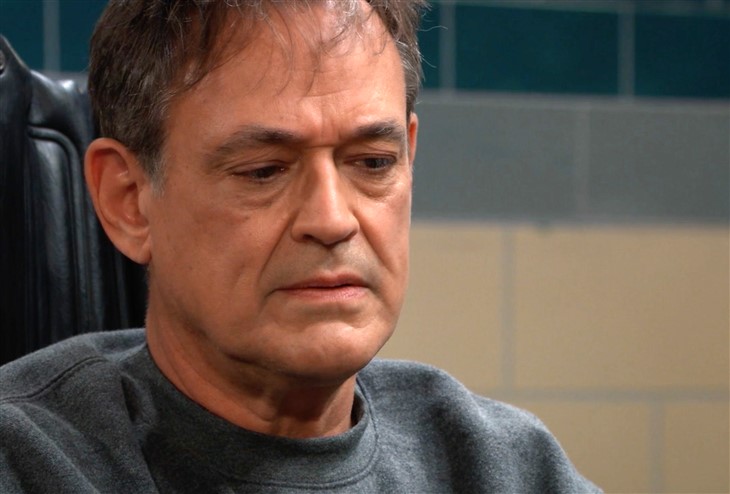 General Hospital spoilers and updates tease that Ryan Chamberlain, (Jon Lindstrom) having given some pretty explicit instructions to his daughter Esme Prince (Avery Kristen Pohl) will keep a close eye on her when she’s with Spencer Cassadine (Nicholas Chavez) in an upcoming episode of General Hospital!

General Hospital viewers will recall that Ryan gave Esme quite the lecture in a recent episode of General Hospital, scolding her right there in the visiting room of Spring Ridge, taking quite a risk of his faking of his locked-in syndrome being exposed!

Ryan was upset that Esme had been playing juvenile pranks on Spencer’s friends – although making a sex tape of Cameron Webber (William Lipton) and Josslyn Jacks (Eden McCoy) and blaming Trina Robinson (Sydney Mikayla) after putting it on the net is a little advanced for a juvenile prank!

This is what he had overheard Esme talking about to Spencer before he called her out on deviating from the plan, which had been to break up Nikolas and Ava Cassadine (Marcus Coloma, Maura West). As far as Esme’s “feelings” for Spencer, they were all part of getting to Port Charles to get close to Ava and he has been only a means to an end all along! So when Esme comes to Spring Ridge to visit Spencer, Ryan keeps a close eye – and a close ear – on them to monitor everything that happens.

GH Spoilers – Ryan Chamberlain Sits, Pretends To Be Locked In, And Observes

General Hospital viewers can imagine that Ryan won’t be where Spencer and Esme can see him, because he will want to be close enough, but unseen enough, to observe their body language as well as their conversation! General Hospital viewers know that Ryan is expecting Esme to up her efforts to get Nikolas away from Ava, and that she should be trying to get Spencer back on track with the plan as well!

As he warned her, Ryan doesn’t want to see Esme being sidetracked again with the games she has been playing with Spencer’s friends and stay on track with the plan; because if she doesn’t, there will be consequences even for his “beautiful and gifted daughter”! Viewers will recall that he can be physically rough on her as he showed who’s boss when he grabbed her wrist and it hurt her after she sassed him and threatened to tell Kevin Collins (Jon Lindstrom) on him!

General Hospital viewers can expect that Ryan will likely follow up after his observations of Esme and Spencer together, and if she has gone off track again, she’s going to hear about it! Esme should not be trying to involve herself with Spencer’s friends, the only people she is supposed to be ingratiating herself to are Nikolas and Ava, in order to get between them and split them up!

General Hospital viewers know that Spencer is almost finished with his thirty day sentence at Spring Ridge, and Ryan will be wanting to observe any visits he has with Esme and perhaps with anyone else, such as Nikolas, to get a read on if Esme’s doing the job that he is expecting! Esme is most definitely on probation where Ryan is concerned!