Days Of Our Lives Spoilers: A Confrontation Ensues As Abigail Accuses Gwen Of Kidnapping Her 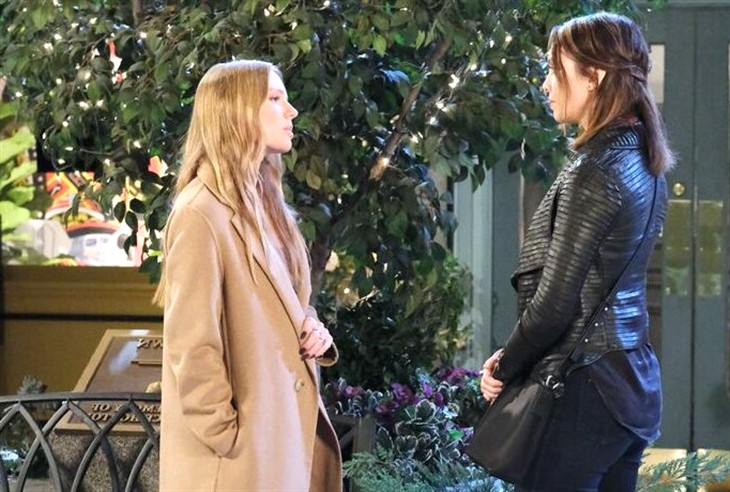 Days of Our Lives spoilers and updates tease that a confrontation will ensue when Abigail DiMera (Marci Miller) accuses Gwen Rizchech (Emily O’Brien) of kidnapping her in an upcoming episode of Days of Our Lives!

Days of Our Lives viewers will remember the night that Abigail was kidnapped and sent to Kristen DiMera’s (Stacy Haiduk) tropical island; she had followed “Sarah Horton” (Linsey Godfrey) who was really Ava Vitali (Tamara Braun) in a Sarah mask. Days of Our Lives viewers will recall that she wrestled “Sarah” to the ground, and tore the mask off, but then Gwen came up behind her and knocked her out with a blunt object!

Abigail woke up on the island with Kristen, and eventually all who were there – except Kristen, of course, who escaped again – are now back in Salem, and Abigail suspects Gwen was the one who conked her on the head! She thinks, correctly, that Kristen, Ava and Gwen were all working together to conceal Sarah’s original kidnapping. Poor Sarah, of course, received a syringe full of the same drug straight into her bloodstream that Gwen had spiked Abigail’s drink with a year or so earlier that put her in the psych ward several months!

Days of Our Lives viewers know that Gwen is newly engaged to Xander Cook, (Paul Telfer) and that she was very intimidated by his love for his lost Sarah – even though he tried to assure her that he has moved on! Days of Our Lives viewers will also remember that is what Kristen blackmailed Gwen with to help spring her from the Salem jail, along with Ava, who she also blackmailed to free her when she was supposed to be transported to Statesville.

While Kristen didn’t rat Ava and Gwen out, with Abigail’s investigative skills and suspicious mind, it doesn’t take very long to realize that Gwen must have been the one who knocked her out, because she would have had an interest in keeping Sarah away! No one but Kristen knew Sarah took on the identity of the late Renee DuMonde (Philece Sampler) until Abigail and Steve and Kayla Johnson (Stephen Nichols, Mary Beth Evans) got to the island. Gwen would have been afraid Xander would dump her and reunite with Sarah if she were found, and she certainly was.

Days of Our Lives viewers will see Abigail confront Gwen with her suspicions, which Gwen of course will vehemently deny – Gwen now knows that Sarah is not a threat as long as she’s not in her right mind. Gwen is understanding of Xander’s wanting to see that Sarah is hospitalized and understands why he is talking to Maggie Kiriakis (Suzanne Rogers) about signing judicial commitment papers, as Abigail also would be.

But that doesn’t mean that Abigail doesn’t want Gwen brought to justice for her role in kidnapping her, even if it did lead to Sarah’s return – which is what Abigail intended; she just didn’t want to get to the island in the manner that she did! Days of Our Lives viewers can expect that Abigail and Gwen will get into a very ugly shouting match over Abigail’s suspicions, which are correct, of Gwen being involved along with Ava in her kidnapping!