The Bold And The Beautiful Spoilers: Quinn To The Rescue, Shuts Grace’s Plot Down! 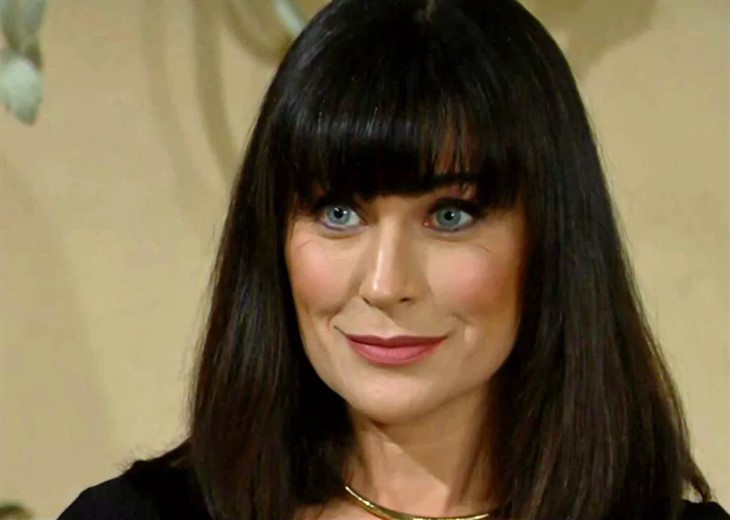 Viewers of The Bold and The Beautiful will recall that Grace blackmailed Carter, threatening to turn him into the Forrester powers that be for sexual harassment if he didn’t stay away from Paris Buckingham (Diamond White)! Grace has focused all her attention on getting Paris married to Zende Dominguez, (Delon de Metz) who Paris is less than interested in recently, her attractions being much stronger to Carter!

The Bold And The Beautiful Spoilers: Brooke Comes Roaring Back To Take Ridge From Taylor

To top it all off, in a recent episode of The Bold and The Beautiful, Grace barged in on Carter at his loft while Paris was with him, and Paris let her in his door – with the two of them in a state of undress! Even though Paris tries to set her mother straight that it’s Carter she wants, not Zende, Grace follows through with her threats to Carter, and it’s bound to get back to Quinn! Quinn is not quite in the loop with all things Zende and Paris, but she does know that the ring she made for Zende to propose with wasn’t used – he verified that she said she wasn’t ready to marry yet.

Viewers of The Bold and The Beautiful know that although Quinn had to break off her affair with Carter, even when Eric Forrester (John McCook) had allowed it, she still cares about Carter, and she won’t like it at all when Grace blows into the Forrester office! Viewers of The Bold and The Beautiful can imagine that Grace will blow into the office looking for either Ridge Forrester (Thorsten Kaye) or want to escalate directly to Eric, and run into Quinn!

Grace has no love lost for Quinn either, since she’s heard about that torrid affair she had with Carter – who she considers a sexual predator, and Grace will waste no time telling Quinn her lover is cheating on her with her daughter – being seriously behind the times! Quinn and Carter have been over several months ago – if not a whole year, and she will soon find out that Carter and Paris are in love – after possibly giving Forrester security guard Charlie Weber (Dick Christie) a call to dispatch Grace!

Longtime viewers of The Bold and The Beautiful will recall that Quinn has meddled in the past with Wyatt Spencer’s (Darin Brooks) relationships but perhaps she’s learned her lesson – after all she was meddling on Zoe Buckingham’s (Kiara Barnes) behalf when she fell into lust with Carter! But Quinn still cares about Carter and wants him to be happy, and certainly doesn’t want him to be fired or worse because of Grace’s rants, so she will do what she can to shut her down!

Viewers of The Bold and The Beautiful wouldn’t be one bit surprised if Quinn knows some dirt on Grace she could use to leverage her with – after all, Wyatt’s girlfriend Flo Logan (Katrina Bowden) was pretty involved in that baby Beth Spencer/Phoebe Forrester (River Davison) scandal. It’s not real clear how long it’s been since Grace divorced Reese Buckingham (Wayne Brady) so she could have even been in on it somewhere in the periphery!