The Bold And The Beautiful Spoilers: Thomas’ Fate Linked To Sheila’s – Do Ridge And Taylor Have Enough Time? 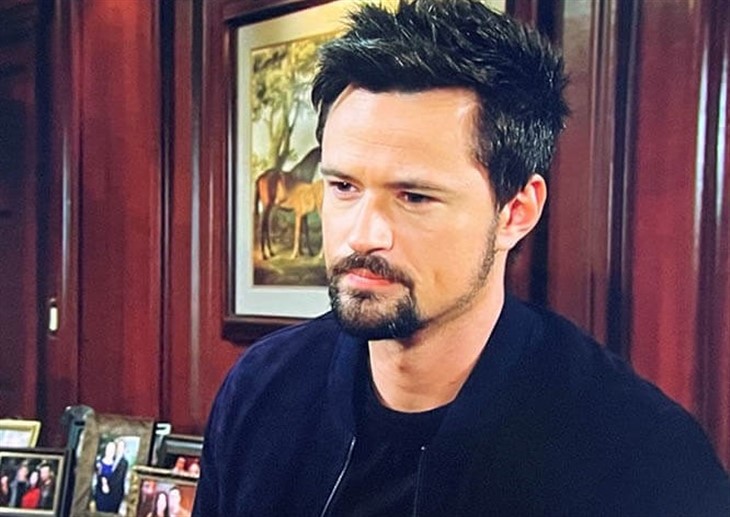 The Bold and the Beautiful spoilers document that Thomas Forrester’s (Matthew Atkinson) future was flowing nicely. He was responsible for changing his approach to life and behaving like a normal, caring human being.

Then, Sheila Carter (Kimberlin Brown) came to the cliff house unannounced and began spouting off about how he and the entire Forrester family should be grateful to her. Sheila claimed that Taylor Hayes (Krista Allen) is getting another chance with Ridge Forrester (Thorsten Kaye) because of what she did to Brooke Logan Forrester (Katherine Kelly Lang).

The statement would be preposterous if made by most people. But Sheila was telling the truth. Her desire for gratitude is highly subjective.

The Bold And The Beautiful Spoilers: Ridge And Carter Overhear Thomas As He Talks To Sheila, He Quickly Covers

The Bold And The Beautiful Spoilers – How Many Forrester’s Are Grateful?

Thomas is not grateful that Sheila tricked Brooke into drinking champagne on New Year’s Eve when thinking that a non-alcoholic bottle was safe. He finds her actions to be disgusting and was outraged that Sheila would target an alcoholic.

The initial reaction of Atkinson’s character is a stark contrast to his reaction in the recent past. He brushed off Quinn Fuller’s (Rena Sofer) similar act, and then never told Brooke about it.

As devoted viewers recall, Quinn was upset that Brooke was again trying to get Eric Forrester (John McCook) to break from Sofer’s character. So, Quinn put alcohol in Brooke’s juice bottle.

Lang’s character became slightly inebriated. But nothing followed to the extent of what happened with Deacon Sharpe (Sean Kanan) at the intersection of last year and this one.

Thomas should have told his father, mother, and Brooke the same day Sheila told him what she had done. Choosing not to do so allows this unstable threat to all families to roam lose in Los Angeles, California.

However, one night to digest the news would have been plausible. Thomas could have contacted Steffy Forrester Finnegan (Jacqueline MacInnes Wood) to tell his sister what was learned and sought her input.

That would have given Thomas some cover for the future when this reveal inevitably comes out. It also assumes that Steffy would have advised him to keep quiet.

Ridge’s mind is spinning. But he appears to have concluded Brooke. While he loves her, Ridge wants off the roller coaster.

His decision is smoothed by Taylor’s presence in LA. Without that, it is reasonable to assume that he would not be talking so soon about the end of his relationship with Brooke.

B&B Spoilers: Finn Tries To Calm Steffy About What Is Going On Between Thomas And Sheila https://t.co/yaZ7McsKyi #BoldTheBeautiful #Spoilers #BB pic.twitter.com/LEtn6i5cf2

If Taylor recommits to Ridge before Sheila’s deeds become known, it becomes possible that Kaye’s character will not return to Brooke. But the longer Taylor and Ridge go before recommitting, the more likely the Sheila reveal serves to reunite Ridge and Brooke.

As for Thomas, the longer he goes without telling all interested parties the truth, the greater the questions his loved ones will have about his reform efforts.