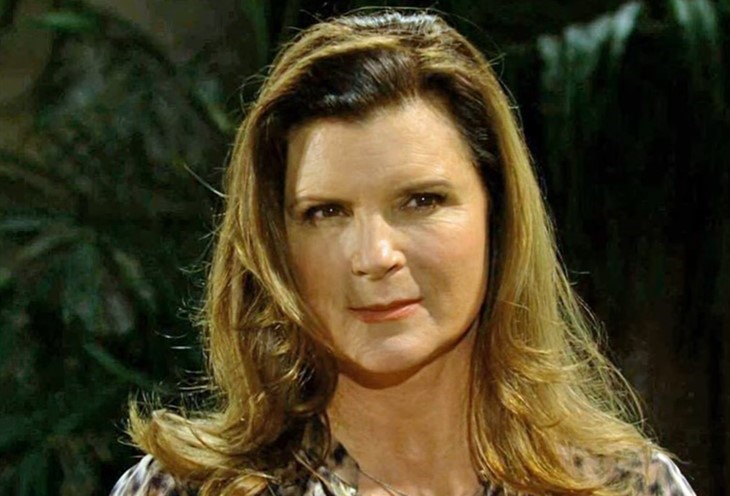 The Bold and the Beautiful spoilers document that Sheila Carter (Kimberlin Brown) knows she made a mistake. Giving into Thomas Forrester’s (Matthew Atkinson) pressure was an uncharacteristic impulse. Fans likely believe it happened to push the plot.

Thomas’ awareness of what Sheila did to Brooke Logan Forrester (Katherine Kelly Lang) opens a door to many possibilities. None of them would have plausibly existed if she kept quiet, as Sheila now needs Thomas to do.

It was logical to believe that the efforts Sheila made to manipulate Brooke’s life were for a reason. She wanted to sink Lang’s character after being threatened.

The Bold And The Beautiful Spoilers: Thomas’ Fate Linked To Sheila’s – Do Ridge And Taylor Have Enough Time?

The burst of anger Sheila displayed when Thomas dismissed her initial conversation at the cliff house was building for months. The lead into New Year’s Eve, where Sheila switched labels on the Il Giordino champagne bottles, resulted in Brooke becoming so drunk that she kissed Deacon Sharpe (Sean Kanan) and unknowingly spent a platonic night with him.

Sheila’s cover would be indefinitely hidden if she did not tell Thomas about the label switch. But a lack of self-control puts Sheila in serious jeopardy of being shut out of her son and grandson’s lives.

Who would have imagined that Sheila was John Finn Finnegan’s (Tanner Novlan) birth mother? Well, TPTB at B&B did, Brown was called back to the cast and one of daytime’s all-time villains is central to the current drama.

Sheila’s plan to have a healthy connection with Finn, his son, Hayes Forrester Finnegan (Samantha Worden and Piper Harriet), and even Steffy Forrester Finnegan (Jacqueline MacInnes Wood), appears doomed. No matter Sheila’s hopes, her backstory, and current behavior prevent any semblance of a normal life.

The Bold And The Beautiful Spoilers – Steffy Forrester Finnegan’s Conflict

A major dilemma begins if Steffy can pry the information about Sheila from Thomas. Steffy despises Sheila, as the two hard-face slaps confirmed.

So, to learn that Sheila is responsible for Ridge Forrester (Thorsten Kaye) and Taylor Hayes (Krista Allen) having another chance together because of the actions of that nemesis will be incredibly vexing. But Steffy needs to learn that part of the plot because she is the one person Thomas can trust to further the secret if they decide to do so.

Will Thomas and presumably Steffy be in league with Sheila as a way to help Ridge reclaim a life with Taylor? And, what form of reward will Sheila demand if so?