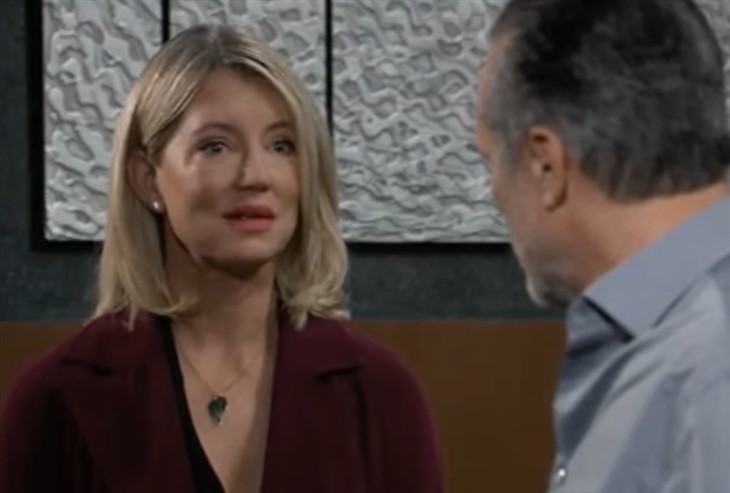 General Hospital viewers will recall from a recent episode of General Hospital that Nina discovered a connection between Harmony Miller (Inga Cadranel, temporarily Priscilla Garita); as Harmony and Nina were at Charlie’s Pub having lunch Phyllis recognized Harmony. Harmony, already nervous about having had a fake birth certificate made for Willow Tait (Katelyn MacMullen) who she and her late husband “adopted” under mysterious circumstances, gets an emergency phone call and has to leave, telling Phyllis long time no see!

Harmony couldn’t deny it – Phyllis called her by her name, Lorraine Miller; and later Nina comes back to Charlie’s wanting to find out how Phyllis and Harmony know each other. General Hospital viewers will see Nina not find Phyllis, as she has stepped out again, but she does find Sonny, and he’s drinking again, which certainly worries Nina, after she got him to throw away all the liquor in his penthouse! Nina wants to know what happened since Sonny not only is drinking but he is very upset!

General Hospital viewers will recall that Michael Corinthos (Chad Duell) was arrested for assault of the freelance reporter Smoltz (David Lautman) after he punched him in front of Port Charles Police Commissioner Jordan Ashford (Tanisha Harper) at General Hospital. Sonny went to the PCPD to do what he could to help and support Michael, but Michael was so angry at him for supporting Nina that he totally rejected him, and things like that send Sonny off the deep end! Nina has no idea how intertwined her and Sonny’s two situations are – after Michael was arrested, Willow Tait (Katelyn MacMullen) mysteriously passed out, and that was Harmony’s emergency call she had to leave for!

Sonny is worried that he won’t get to see Wiley Corinthos (Viron Weaver) anymore either, and tells Nina what happened when AJ Quartermaine (Sean Kanan) died and Michael changed his name to Quartermaine and kept him from seeing Avery Jerome-Corinthos (Ava and Grace Scarola)! That went on for several months, and Sonny explains Ava was presumed dead at the time – Nina remembers, Michael and Kiki Jerome (Hayley Erin) took care of Avery.

General Hospital viewers will see that while Nina understands Sonny’s pain, drinking won’t solve it or the things that caused it, and Sonny was actually hoping to see Phyllis too. Sonny owns Charlie’s Pub so it’s a little awkward for Phyllis to try and stop him from drinking, although if his daughter with Alexis Davis, (Nancy Lee Grahn) Kristina Corinthos-Davis (Lexi Ainsworth) was there she’d definitely address it.

Sonny is probably not going to be open to going to Alcoholics Anonymous but that wouldn’t stop Kristina from strongly suggesting it – Nina, however will continue to be there for Sonny as someone to lean on. Hopefully, Phyllis will come back soon so Nina and Sonny can both talk to her about their situations; Nina knew that there are friends of Lenny Caulfield’s (Rif Hutton) in town she’s hanging with.