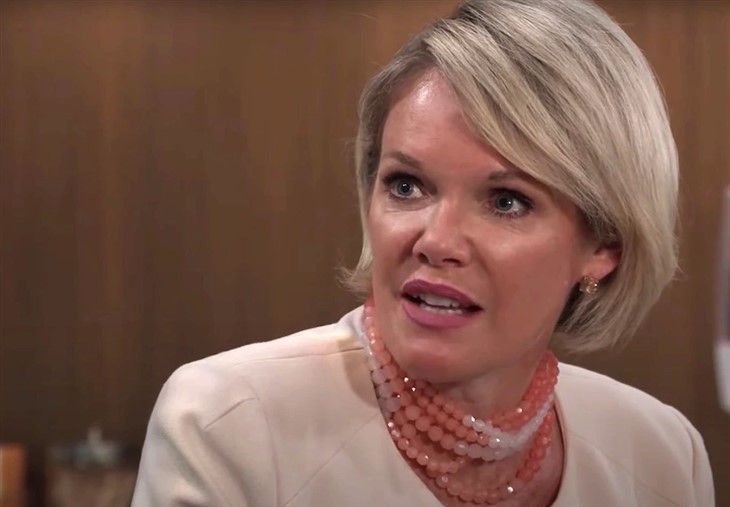 General Hospital Spoilers tease that Ava Jerome (Maura West) and Nikolas Cassadine (Marcus Coloma) are planning to renew their vows. As viewers may recall, the first time the couple married it was hardly for love. It was a business arrangement but over time the pair realized their passion for each other and fell in love for real.

Even Nikolas’ mother, Laura Collins (Genie Francis) has acknowledged that the couple seem to be good for each other. But under Ryan Chamberlain’s (Jon Lindstrom), his daughter Esme Prince (Avery Kristen Pohl) has been tasked to break them up.

Ryan, a dangerous serial killer has been obsessed with Ava for years now. Ava and Nikolas thought that Ryan was no longer a threat because after an injury in prison, Ryan seemed to be suffering from locked-in syndrome. As a result, Ryan could still feel pain and was aware of his surrounding, but was supposedly unable to move except to blink.

But Ryan has been faking the condition, and even worse, Esme is more than willing to do anything to please her father. She got close to Spencer Cassadine (Nicholas Chavez) at Ryan’s request but now Ryan has instructed Esme to seduce Nikolas.

Esme is supposedly in love with Spencer, so even while Spencer is incarcerated at Spring Ridge, she has managed to be a part of Nikolas and Ava’s lives. She’s been buttering up Nikolas with praise and promises to find a way for Spencer and Nikolas to mend their broken relationship.

But Ava is no fool, and it won’t take long before she notices Esme paying a different kind of attention to Nikolas. Nikolas will sincerely believe he’s just being nice, but Ava will know that Esme is up to something. She has seen firsthand how Esme treats Trina Robinson (Sydney Mikayla),

Ava hasn’t likely forgotten that Esme torched Ava’s car all that long ago, although Spencer took the fall for her. She will do everything in her power to remind Nikolas of how dangerous Esme is, but he may be so invested in getting back in Spencer’s good graces that he may ignore Esme’s obvious advances until it’s too late.

It’s unlikely Nikolas would cheat on Ava willingly, but she could very easily drug him and slip into his bed. Of course, the plan would be for Ava to catch them and break up with Nikolas. But perhaps Ava and Nikolas will realize what’s going on before the plan goes that far. They might also use it as an opportunity to catch Esme in the act. She’s gotten away with far too much up until now.

Will Esme succeed in getting Nikolas into bed? Or will Ava and Nikolas turn the tables on her? Could this be the beginning of Esme’s downfall? Anything can happen in Port Charles so stay tuned to General Hospital airing weekdays on ABC. And don’t forget to check back right here regularly for all your General Hospital news, information and spoilers!