The Bold And The Beautiful Spoilers: Steffy And Sheila May Find Common Ground Over Brooke 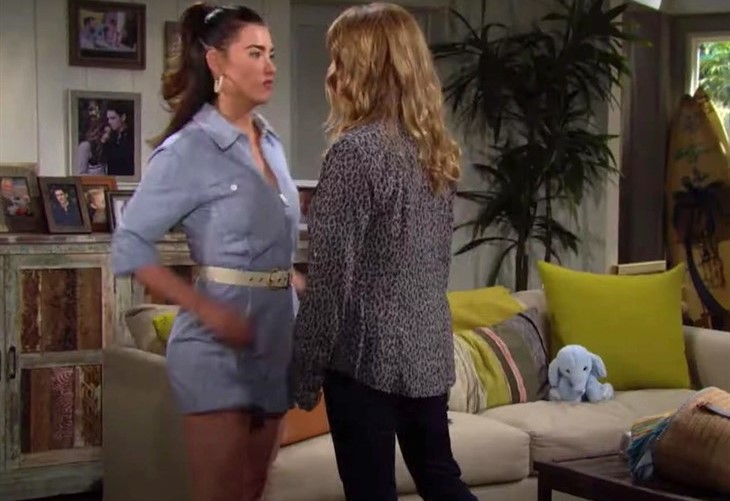 The Bold and the Beautiful (B&B) spoilers and updates Steffy Forrester (Jacqueline MacInnes Wood) has wanted to bring her family together. Steffy has just gotten what she wanted. Steffy has wanted her mother Dr. Taylor Hayes (Krista Allen) to be with her father Ridge Forrester (Thorsten Kaye). Steffy does not know that Sheila Carter (Kimberlin Brown) is the one that helped to bring Taylor and Ridge together.

Sheila found a way to sabotage Brooke Logan Forrester’s (Katherine Kelly Lang) sobriety by switching labels on the champagne bottles. Brooke ended up with Deacon Sharpe (Sean Kanan) on New Year’s Eve and getting drunk with him. Thomas Forrester (Matthew Atkinson) has found out that Sheila sabotaged Brooke. Thomas is conflicted and does not know if he should keep the secret or tell Brooke the truth.

Steffy may find out the secret that Sheila and Thomas are keeping. Steffy has been concerned about Thomas. She was surprised to find Thomas and Sheila having a conversation. Steffy may decide when she finds out the truth that she is happy that Sheila has sabotaged Brooke’s marriage to Ridge. Steffy has been hoping that Ridge would go back to Taylor. Steffy believes that Taylor is the right woman for Ridge. Steffy believes that that Brooke is going to hurt Ridge if he stays with her.

Steffy may reconsider after she finds out what Sheila has done to Brooke. Sheila was happy when Taylor invited her to visit with Finn and Hayes on Christmas Eve. Sheila has wanted Steffy to approve of her and let her be in Finn and Hayes’ lives. Steffy may believe that Sheila should be given a chance to be a part of Finn and Hayes’ his lives because she has managed to get Brooke out of Ridge’s life.

The Bold and the Beautiful Steffy and Sheila may be able to start to see eye to eye because they have not liked Brooke. Steffy may believe that Sheila is less of a problem than Brooke. Steffy may believe that it is better to have Sheila in their lives then Brooke. Will Steffy give Sheila a chance if she finds out that Sheila is the reason that Brooke and Ridge are not together? Sheila has wanted to get Steffy’s approval.

Sheila may be able to get Steffy’s approval because Ridge has turned to Taylor. Will Sheila be able to get Steffy to let her be a part of Finn and Hayes’ lives? Steffy and Sheila have a common goal and they could be brought together because of Brooke. Be sure to catch up on everything happening with B&B right now. Come back here often for The Bold and the Beautiful spoilers, news, and updates.