The Bold And The Beautiful Spoilers: Will Ridge Reconcile With Brooke After Reveal? 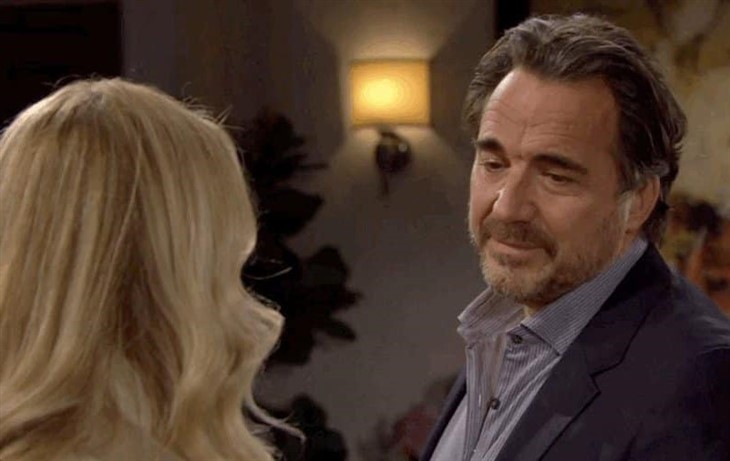 The Bold and the Beautiful spoilers document that Ridge Forrester (Thorsten Kaye) continues to check in on Brooke Logan Forrester (Katherine Kelly Lang). He appears to be attempting an extended, soft break. But is that possible considering their legendary history?

Eric Forrester (John McCook) told Ridge that he appreciates Taylor Hayes (Krista Allen). Eric cited her as an impressive woman and said he is fond of her. However, Brooke was tagged as the woman Ridge most loves.

The fans know that Brooke was wronged by Sheila Carter (Kimberlin Brown). Does that allow audience speculation regarding whether Ridge will take Brooke back after that reveal?

The Bold And The Beautiful Spoilers: Steffy And Sheila May Find Common Ground Over Brooke

The Bold And The Beautiful Spoilers – Sheila Carter Feels Justified

Sheila told Thomas Forrester (Matthew Atkinson) that he holds power. As long as he does not tell Ridge what Sheila did, it is reasonable to believe that his dad and Taylor will reconcile through to remarriage.

The incredible rationalization that Sheila made centered on one heated threat. Deacon Sharpe (Sean Kanan) knew it was bad for Brooke and Sheila to be in each other’s proximity. Within minutes of that happening at the often seen Il Giordino, Brooke told Sheila that she would not allow her to form a relationship with John Finn Finnegan (Tanner Novlan).

That was all it took for Sheila to internally explode, as she did not respond in Brooke’s presence. Sheila decided Brooke could realize her threat, which was very debatable, and then created the label switch scenario.

If Taylor had not returned from Africa, following her missionary work, it is fair to speculate that Ridge would still be living at the mansion. Even if he had moved out for a short period, Ridge would not have been influenced by the lure of Taylor.

The recast character Allen is playing is the ideal contrast to Brooke. As Lang’s character said, Taylor is sweet. Brooke’s rough exterior has attracted many men through the years. Ridge has most often forgiven the mistakes her brazen personality creates.

The Bold And The Beautiful Spoilers – Brooke Logan Forrester Is Frazzled

One day Brooke wants Ridge back. The next, she is telling him to go back to Taylor. Then, Brooke reconsidered and decided to fight for the man she loves more than any other.

Brooke’s fragile state weighs heavily on Ridge’s mind. That reality will only intensify if he chooses to remain at the cliff house with his other family.

It would seem that Sheila’s reveal would give Ridge room to justify returning to Brooke. But will he be able to pull himself away from Taylor if too much time passes between now and whenever TPTB decide to make Sheila’s outrage known?